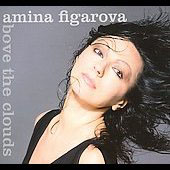 On September Suite (Munich, 2005), Amina Figarova's inspiration was one of the biggest events this generation may ever know—the September 11th attacks, and their psychological aftermath. While Above the Clouds's subject matter is both smaller and lighter, Figarova again chooses a large medium and a multi-colored palate to illustrate her vision. And this is all to the good because, in many ways, Clouds is the antithesis of September.

Much of Clouds's emotional foundation comes from the words of Figarova's mother: "If you're not feeling well or you feel sad, just play the piano or dance, and you will feel so much better." While the listener can't play the piano (and wouldn't want to, given how beautifully Figarova handles the instrument), he or she can dance in many places on Clouds; with the title track, the dance happens in mid-air, thanks to inspiration Figarova received from an in-flight listen to Maria Schneider's uplifting disc, Sky Blue (ArtistShare, 2007).

""A" Dance" swings for the fences immediately, with trumpet and tenor playing the driving melody while Bart Platteau weaves his magic flute around them. When Figarova solos, she sounds like a scat singer with a powerful voice that can match the front line's every move; the ensemble's galvanizing interplay never wanes, even when the piece slows into a momentary waltz. Their exemplary sense of purpose is heightened on the staccato "Sharp Corners," where the rhythm section's superior bebop foundation keeps the piece's direction constant while slashes of color and light fly by.

On the wafting title track, Figarova's solo evokes a ballerina toe-dancing in a spotlight, and the dancer never loses that sense of delicacy, even when the dance gets bigger and more dramatic. "Summer Rain" offers the same effect, though the latter composition doesn't stray from its initial subtle intent. Figarova eventually ramps up the energy on "Nico's Dream" (written for trumpeter Nico Schepers), but her opening duet with Schepers gives the piece a forlorn feel that should appeal to anyone who has loved and lost.

As striking as Figarova's compositions can be, it is the front line that gives her the depth and color she needs to make her vision complete. Platteau plays pastoral lines on the title track, and brings a Native American air to "River of Mountains (Muhheakunnuk)"—one of two tracks that presage Figarova's upcoming project on the explorations of Henry Hudson. Those tracks add alto sax and trombone to Figarova's regular sextet, giving the mini-suite even more punch. Without them, Clouds's power has to come from Schepers and Ernie Hammes; while Kurt van Herck's slurry tenor is appropriate on "Rain," his overall lack of power and shape is distracting at best.

Those who love September but can't handle its weight will welcome Clouds's sunnier disposition. That doesn't mean newcomers to Figarova should stay away from September, but Above the Clouds is a superb introduction to a composer who can do it all and do it magnificently, whether the subject is happy or heavy.