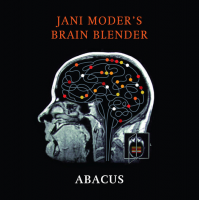 Jani Moder's Brain Blender plays what can only be described as "classic fusion." Bandleader/guitarist Moder attended the prestigious Berklee College of Music. Presumably his bandmates do not possess the same international credentials, but only the dual Slovenian/English credits on the CD case would give that away. It is truly international music, with a sound and technical skill that could be found anywhere. His third album features a basic quartet augmented with a percussionist and guest horn players.

The group charges in on the opening "Horizon T," with Moder's distorted guitar in the lead. Guest percussionist Vid Ušeničnik makes an important contribution—as he does on seven of the ten tracks—despite taking no solos. His mallet playing significantly colors the sound of the album. "Fixation" begins with a more atmospheric approach, but soon locks into a groove, demonstrating how effective the basic quartet can be. The martial drumming that announces "Venus Radius" shows yet another side.

Moder reserves his first guest horn player for the title track, which marks the appearance of saxophonist Cene Resnik. The other guest soloists—trumpeter Igor Matković and saxophonist Lenart Krečič—also make a strong impression on their featured tracks. A very well-paced program overall.

Moder's compositions are striking and memorable, and his band delivers them with verve.