By Jerome Wilson
January 28, 2018
Sign in to view read count 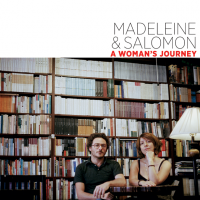 A concept CD that looks at the plight of women throughout history is timely these days but not unusual. This disc by the duo Madeleine et Salomon, however, stands out by drawing from a broader swath of musical sources than you might hear in most similar projects. They touch on familiar songs like Billie Holiday's "Strange Fruit" and Nina Simone's "Four Women" but they also go farther afield to do tunes originally performed or written by Janis Ian, Marvin Gaye, Mimi and Richard Farina and Minnie Riperton.

The overall musical mode here is a minimalist blend of voice and piano with Clotilde Rullaud's vocals cooing softly over Alexandre Saada's dramatic piano with an occasional bit of flute mixed in. This leads to the normally angry "Strange Fruit" and "Four Women" being performed with an air of mournful resignation but other songs get more emotional treatments. The Farinas' "Swallow Song" has urgent duet singing over a galloping piano riff and gives off a sense of ominous menace. "The End Of Violence" is a seething poem by Elaine Brown, an early female member of the Black Panther Party that is recited with understated resolve by Rullaud before she segues into an impassioned, wailing rendition of Janis Joplin's "Mercedes Benz." The darkest and wildest track of all is "No Government/High School Drag," a medley that combines an electronic dance song that wishes for a wantless utopia with a nihilistic pseudo-beatnik poem from the movie High School Confidential. Saada plays a hammering, piano riff here while Rullaud sings the song seductively and recites the poem in a sharp, cawing bark. This section is as much performance art as music but it still works marvelously.

It is not all darkness. There are passages of light and hope, notably in their pleading version of Marvin Gaye's "Save The Children" and on an old Minnie Riperton single, "Les Fleurs," a lovely piece of light, romantic soul with Saada on electric piano. The romantically whispered ""Vous Faites Partie De Moi" is actually "I've Got You Under My Skin" with French lyrics written by Josephine Baker. That leads into a wandering piano and voice improvisation that closes the CD.

In performance this work is accompanied by short films but the musical component alone is very compelling. This project runs through a gamut of emotions like anger, sadness, joy, and optimism, throwing new angles onto familiar songs and exposing forgotten songs and songwriters to the world at large. This is a strong work of art that seems like it would be amazing live.