By DAN BILAWSKY
December 16, 2013
Sign in to view read count 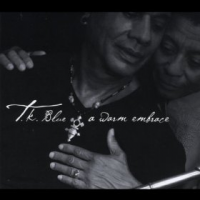 What do you do after you've already toured the world with jazz legends, helmed a successful college jazz program and recorded everything from bluesy fare to world-meets-jazz music to Latin-ized takes on Charlie Parker? If you're saxophonist T.K. Blue, you turn to the soft(er) and the subtle, delivering an album that's texturally rich yet wholly transparent.

Blue, best known as a longtime sideman and musical director for pianist Randy Weston, has done all of the above and more. A three year stint with pianist Abdullah Ibrahim, extended time in Paris, sojourns in Africa, sideman and leader work in New York, and a continuing role as Director of Jazz Studies at Long Island University's LIU-Post campus all figure into his impressive résumé, but what's most incredible is how grounded he is in his work. Blue's brand of music is honest, sincere, graceful and direct; that same adjective set, not surprisingly, also applies to the man himself. Blue isn't about posturing or pushing the envelope to earn a progressive tag. He's about the music and the feeling it creates, both in the artist and the listener.

Warm Embrace—Blue's tenth album—isn't a ballads record per se, but it leans in that direction. Blue favors his flute(s) over his saxophone(s) and doesn't push things in too many places; "peace over power" could very well be the motto for this one. Blue and his crew, which includes play pals like pianist James Weidman, bassist Essiet Essiet, guitarist Ron Jackson and drummer Winard Harper, explore mellow moods across the album but they never fall into a rut. Buoyant grooves ("Tides Of Romance"), light Latin lilts, haunting tides ("Requiem For A Loved 1") and intimate affairs (""Eu Sei Que Vou Te Amar") are all part of the package. Blue occasionally breaks free from his own sea of tranquility, as on Weston's lively-and-waltzing "Portrait Of Patsy J," but he prefers to swim in gentler waters here. Sometimes that involves settling in over the Quartette Indigo Strings ("Once Loved") or taking the lead during a flute and piano dalliance ("A Quiet Place"), but more often than not it involves having a nuanced band behind him. The core group expertly supports guest vocalist Alana Adderley during the bossa-to-swing-to-bossa "When Sunny Gets Blue," provides some pep on "Tides Of Romance," and comes off clean-and-polished on the title track.

Blue's skills as an arranger, perhaps more than anything else, are responsible for the success of this project, as he's able to create beauty from simplicity at times. He makes more out of a vamping pattern, for example, than others could do with an extensive chord progression. His arranging mimics everything else about him, with the forthright and frank winning out over all else.

A Warm Embrace is simply a beautiful work of art; it's exactly what it claims to be and need not be anything more.

A Warm Embrace; Tides Of Romance; Eu Sei Que Vou Te Amar; Never Felt This Way (For Antoine And Monique); Requiem For A Loved 1 (For Benny, Jayne, Ted, Earl, Mulgrew, Shirley, Hotep, Zim, And Sathima); The Essence Of U; Once Loved; Portrait Of Patsy J; Dance Of Passion; A Quiet Place; Goodbye Is Not 4-Ever; When Sunny Gets Blue; Dance Of Love Never-Ending.