By Florence Wetzel
August 25, 2005
Sign in to view read count 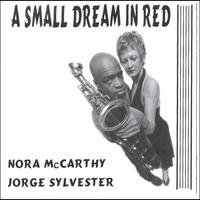 A Small Dream in Red is a new CD as well as the name of the group composed of vocalist Nora McCarthy and alto saxophonist Jorge Sylvester. Inspired by painter Wassily Kandinsky's 1925 masterpiece of the same name, A Small Dream in Red is a joy of dynamic interplay between two diverse talents. McCarthy's roots include the American songbook, R&B, Brazilian music, and Hawaiian folk, and in recent years she's embraced—and been embraced by—the avant-garde. Sylvester, who studied at Karl Berger's legendary Creative Music Studio, has played with everyone from Stefon Harris to Oliver Lake to David Murray, and is best known for his integration of Afro-Caribbean rhythms into mainstream and avant-garde jazz.

The recording captures this formidable duo live at a 2003 concert at Cleveland State University. The five cuts include a beautiful medley of "Afro Blue/My Romance," Miles Davis' "All Blues," Ysaye Maria Barnwell's "Wanting Memories," and original compositions by both McCarthy and Sylvester. The lineup may be minimalist, but the music certainly isn't; both McCarthy and Sylvester have extensive palettes and their nuances of color and conception are a pleasure to behold. McCarthy's voice stretches and soars and whether she's singing straight-ahead, scatting, or simply vocalizing, her voice rings true and clear. Sylvester has a gorgeous tone and a sure touch, plus a wonderful ability to weave in and out of melodies.

It's delightful to hear music that plays so freely with the known and the unknown elements of jazz. McCarthy and Sylvester show the utmost respect for the formal elements of music while also possessing the daring to dissolve borders, making A Small Dream in Red an aural adventure of the highest order.

Visit Nora McCarthy on the web.