Patrick Grant: A Sequence of Waves (Twelve Stories and a Dream)

By PAUL NASER
December 8, 2017
Sign in to view read count 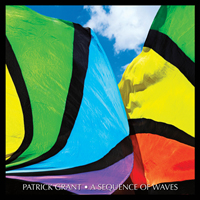 Multi-instrumentalist and composer Patrick Grant's music can be difficult to classify. This is probably, at least to a degree, intentional. The NYU film school professor and multiple-time ASCAP Plus Award winner was a long time member of the legendary Robert Fripp's Orchestra of Crafty Guitarists and has scored multiple theater and dance companies' projects.

Those with even a passing familiarity with Fripp's work, which became iconic during his time with the relentlessly experimental, impossible to categorize King Crimson, will correctly assume that Grant's music has a forward-thinking edge. Fans of King Crimson, Fripp, progressive rock, or contemporary film scoring a la Hans Zimmer will undoubtedly find much to appreciate in Grant's latest release A Sequence of Waves (Twelve Stories and a Dream), as will people with eclectic musical tastes or those with an affinity for unique instrumentations and rhythmic complexity.

The instrumentation on the record varies widely, but is glued together by consistently compelling rhythmic motifs and development. The timbres range from distorted electric guitars to beautiful swelling synths to acoustic percussion and strings. They manage to work together very well, such as in the beautifully composed and produced "Seven Years At Sea." Other highlights include the rhythmically intense, and aptly named, "Driving Patterns," as well as the epic "To Find a Form That Accommodates the Mess." The album even includes an extremely original cover of Antonio Carlos Jobim's "One Note Samba," that at the very least warrants one listen through, if not three or four.

From the unique and inventive production to the remarkably creative compositions and the uncommon and effective instrumentations, fans of innovative creative music would do well to give this record at least one listen through. Then see if the genre-defying work doesn't have you coming back for multiple listens, if for no other reason than to figure out exactly what was going on.