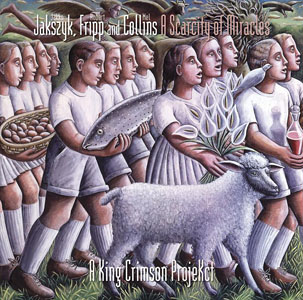 It's been the subject of much discussion. The closest thing to a King Crimson record, after founder/guitarist Robert Fripp closed up shop on the brief 40th Anniversary tour? Hardly. A Scarcity of Miracles may be called "A King Crimson ProjeKct" on the cover, but there's little to link the music to any of King Crimson's past lives. Or is there?

With four of A Scarcity of Miracles' participants past Crims—Fripp; drummer Gavin Harrison, from the 2008 tour; bassist Tony Levin a longstanding alum from 1981 on, barring the 2000-03 lineup; and saxophonist/flautist Mel Collins returning after an absence of over 25 years, last appearing as a guest on the landmark Red (DGM Live, 1975)—it's a small leap to place it within the Crimson continuum. Add Jakko M. Jakszyk, who managed to do the near-impossible—sing and play Fripp's knotty parts in the all-Crimson-alum tribute, 21st Century Schizoid Band (also featuring Collins)—and it would seem impossible for this group to be anything but Crimson.

But it isn't. Fripp has always determined when a project becomes Crimson, and his verdict on Scarcity? "It has the Crimson gene," he says, "but is not quite KC." And, no surprise, he's right.

Compared to Crimson and Crimson ProjeKcts of the past couple decades, Scarcity is surely the gentlest album to carry the Fripp name, beyond Soundscape albums like the poignant Love Cannot Bear (DGM Live, 2005), and is just as certainly the most melancholically beautiful. But the group is called Jakszyk, Fripp & Collins for a reason: these sessions, to which Levin and Harrison were added much later—stemmed from improvised sessions by Jakszyk and Fripp, with Collins added as the project began to take more expansive shape. It's no surprise, then, as the two guitarists began massaging the material into more defined song form, that the material also began to resemble Jakszyk's overlooked The Bruised Romantic Glee Club (Iceni, 2006).

Still, the Crimson gene is there. The beginning of "The Other Man" incorporates the slightest hint of Gamelan, an ongoing inspiration for Fripp since Discipline (DGM Live, 1981). And, as Jakszyk's warm voice is layered, its oblique melody overarching the whole-tone center that Fripp has explored since "Fracture," from 1973's Starless and Bible Black (DGM Live), and Levin and Harrison enter with the album's most aggressive pulse, this may not be Crimson, but it's darn close.

Whether or not it actually matters is up to the ear of the beholder. A Scarcity of Miracles returns Fripp to a nearly all-English lineup for the first time since the '70s, and while impossible to define why, possesses the most decidedly British feel of any group project in which Fripp has participated since his 1990s work with David Sylvian. It may lack the sharp corners, jagged edged and harder surfaces of latter-day Crimson, and there's none of the overt symphonic prog of early Crim, but Jakszyk's refined vocals, soft-spoken playing and haunting songwriting, Fripp's searing lines and orchestral soundscaping, and Collins' soaring melodies make for the best group record—Crimson or no—to come from the Fripp camp in nearly 30 years.

A Scarcity of Miracles; The Price We Pay; Secrets; The House; The Other Man; The Light of Day.