Frode Kjekstad: A Piece of the Apple

By GENO THACKARA
August 7, 2017
Sign in to view read count 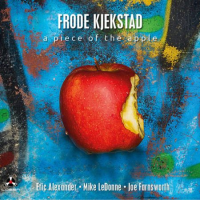 There's no telling just when or why a certain place will sink its hooks into you. However active Frode Kjekstad remains in his native Norway, he's clearly left his heart in New York City. The bustling personality of the metropolis can be felt all over his bop-and-blues compositions and fleet fretwork. With a classy full-bodied tone and innate feel for that most snazzy kind of swing, he honors the lineage of jazz guitar from Grant Green to Kurt Rosenwinkel with no shortage of love and respect for the genre's roots.

Kjekstad made this affection clear as far back as New York Time (Curling Legs, 2005), primarily an organ-trio date which included N'Yawker saxophonist Eric Alexander as special guest. This date makes a figurative geographical return after some time away with his Italian Job project. A Piece of the Apple was made just across the river in northern New Jersey, bringing Alexander back as full session member and rounding out the date with two more fixtures of the city's jazz scene—all factors that build up an impeccable amount of NYC cred, and the music could hardly give that distinct vibe more strongly if it was served with some rich creamy cheesecake.

Mike LeDonne is brash and hip while snaking over the Hammond B3 keys, always ready to match Kjekstad's lightning lines and give back as good as he gets. Joe Farnsworth's drumming not only keeps things cooking at the right steady pace, but his familiar established rapport with LeDonne and Alexander keeps the overall spirit freewheeling and vibrant. The presence of sax throughout is of course integral to the affair's big-city feel, from the almost detective-noirish title track to the more thoughtful cozy ballads. All four are willing to kick off fast, go loud and swing like mad.

The are a few well-chosen chestnuts here (most notably an almost frantic read on Mercer & Arlen's "My Shining Hour"), after Kjekstad's own pieces have established a fun house-band vibe in the early stretch. His finale "The Lone Ranger" almost feels like a signoff for some talk show or Saturday Night Live installment at the end of the night, and the band's jauntiness rarely lets the party stop for a breath in between. It's just an insignificant coincidence that the leader happened to be born in a different hemisphere; A Piece of the Apple truly belongs to its namesake through and through.

A Piece of the Apple; Malala; The Three Musketeers; Not While I'm Around; That's All; Cold Duck Time; My Shining Hour; Invitation; The Lone Ranger.