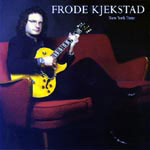 Guitarist Frode Kjekstad is a Norwegian who makes himself at home in the Big Apple on this splendid album with New York companions Dr. Lonnie Smith, Byron Landham, and special guest Eric Alexander. To me, there are few musical alliances more pleasing than a guitar/organ/drums trio that sounds terrific and swings like a metronome, as this one does. If there's anything that could enrich the partnership, that would certainly include inviting an eloquent and powerful tenor saxophonist such as Alexander to sit in, which Kjekstad does on four numbers—Stanley Turrentine's bluesy "Sugar and three of his svelte original compositions, "Prospect Park S.W., "Brooklyn Bound and "Over Easy.

Kjekstad has impressive chops and a warm, resonant sound, which Smith's Hammond B-3 complements superbly, while Landham keeps perceptive and tasteful time. Alexander fits in snugly on his cameos, broadening the trio's horizons while adding spice to the basic recipe. As for role models, Kjekstad drops a broad hint with the inclusion of Wes Montgomery's ambling "Road Song, on which he pays homage to Wes's groundbreaking style. Rounding out the admirable program are the standards "The Way You Look Tonight, "Secret Love, "Laura and of course, "Autumn in New York. I was especially charmed by the swaying, Jobim-like treatment of "Secret Love, which embodies typically persuasive solos by Kjekstad and Smith.

There's nothing Scandinavian about this refreshing studio date save for the leader's name. You may not be able to pronounce it, but if you appreciate special talent that's all you need consider. Leave the rest to Kjekstad and Company, whose music speaks emphatically for itself.