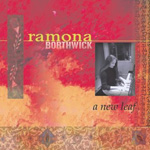 A New Leaf is at turns melodious, swinging, emotional and cool. Like Min Rager's Bright Road, it is brimming with energy and good vibes, and the compositions are first rate.

The choice of title tune is always instructive, and the opening "A New Leaf" exposes Ramona Borthwick's many influences. Starting with a simple, Americana-ish figure, it swerves into a bit of what could be Chopin, only to shift immediately into a subtle Latin beat intro that leads to trumpeter Phil Grenadier's first notes. The tune never stays put as Borthwick skillfully blends many styles with her piano work, including Southeast Asian and Brazilian influences.

It must be noted that Grenadier is a player to watch. His playing has a real genuine unpredictability about it, coupled with a trumpet tone that could be a flugelhorn at times.

"Garbarero" introduces some sensual Brazilian scat from Esperanza Spalding, behind which Borthwick sings, but the tune will not let itself settle into anything that is simply Brazilian. Dark chords enter, and the tune shifts into a subtle groove for more playing from Grenadier, who twists and turns over the ever-changing rhythm. Noel Borthwick (Ramona's husband) also makes his first appearance on guitar, with a dark sound and a very fluid attack.

Another example of Borthwick's restlessness is "Home," a bigger composition which takes its time to define itself as she allows the music to build with subtly shifting rhythms underneath. Almost a ballad, but not quite, it softly pushes forward, taking breath for a guitar solo, until the piano brings it home.

Things heat up on "Dark Secrets of Three Blind Mice" with an opening vamp on a pedal chord as trumpet and guitar trade lines. These instruments introduce the melody in unison and then we are off with piano playing over a tight groove, leading to a ripping and flying guitar solo. Grenadier comes in to answer, taking his time and letting it grow. "Indian Summer," however, takes a left turn with a darker sound and another exquisitely crafted solo from Grenadier.

Shape-shifting and extremely warm, A New Leaf is a pleasure to listen to from beginning to end. It is an important debut album from a fine composer and player.