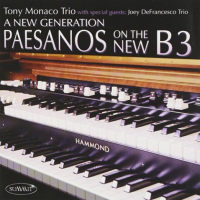 Recently there has been a glut of trendy organ jazz records. All have been capably conceived and performed. Most have been cutting edge, expanding the role of organ jazz with in the music. The majority of this music has steered away from standards and blues and focused on original compositions as vehicles. While, this is what keeps this music alive and growing, it does make it a bit low fat.

Listening to organ jazz is a bit like eating collard greens after the first frost, one longs for a bit of grease in the mix. And the keepers of the flame, Tony Monaco and Joey DeFrancesco can always be counted on to supply that Jimmy Smith salt pork. These two giants join forces on A New Generation—Paesanos on the New B3, celebrating two facts—one, that they are a new generation and are playing the newly transformed Hammond B3. Briefly, the classic Hammond B3 has been out of production since the mid-1970s. Fast-forward 25 years and digital technology has provided Hammond a new way of producing that unique sound. The new B3 is coupled with the newly designed Leslie 122xb (tube) and 771 (solid state). This analogue/digital hybrid produces a rich organ sound.

Monaco and DeFrancesco wax nostalgic on the Groove Holmes / Jimmy McGriff dyad and their Masters of the Organ series. Each man, armed with his trio, breeze through a series of Monaco originals (blues and ballads) and Nat’s "Mona Lisa" and Edoardo Dicapua’s & quot;Oh Marie." Both organists’ trios are also included in the festivities. And Festive they are. This is straight-ahead organ jazz performance that makes no demands on the listener. That makes this a very enjoyable recording to listen to.