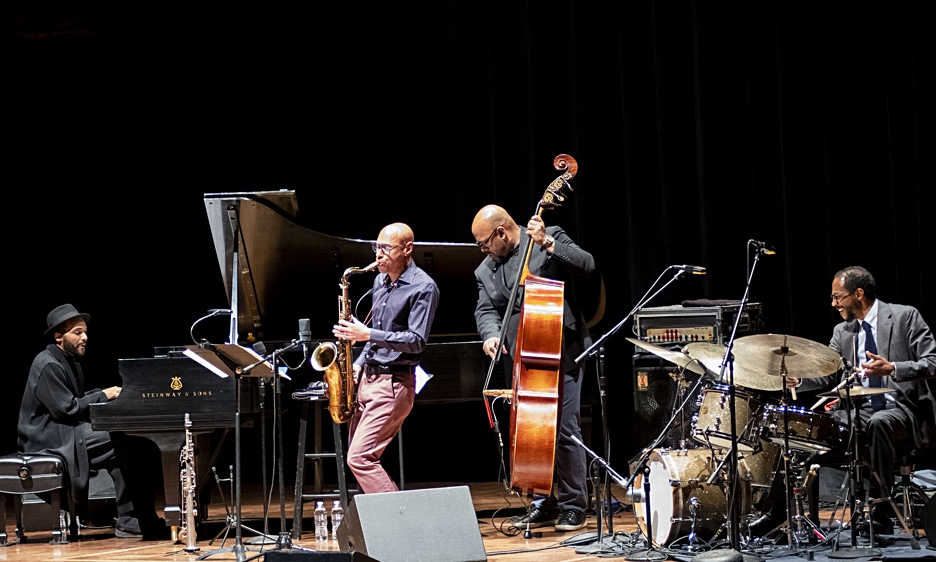 Part of just a handful of dates reuniting this masterful quartet, a recent appearance at Hill Auditorium brought with it a number of surprises.

Back in the '80s and '90s, all the big record labels were pouring boat loads of cash into a younger generation of jazz wannabes that eventually became known as the Young Lions. In hindsight, the return on their investments was somewhat less than desirable, with many names to sink far below the radar of the record buying public in a relatively short period of time. Working against these odds, saxophonist Joshua Redman not only made good on the promise of being the son of jazz icon Dewey Redman, but has gone on to consistently create vital music that also tends to speak to a wide audience.

After his freshman and sophomore efforts for Warner Brothers, Redman's 1994 opus MoodSwing (Warner Bros) hit pay dirt in terms of his maturity as a composer. It would also be notable for chemistry among his bandmates, namely pianist Brad Mehldau, bassist Christian McBride, and drummer Brian Blade. Part of just a handful of dates reuniting this masterful quartet, a recent appearance at Hill Auditorium brought with it a number of surprises, the most notable being that Mehldau was announced as taking ill and not able to make the gig.

A significant buzz around Mehldau's absence filled the hall prior to starting time, however all concerns would be squelched when it was announced that Sullivan Fortner would be filling the piano chair. Having spent seven years in Roy Hargrove's last quintet, Fortner cut his teeth with many jazz luminaries and has won numerous honors as he continues to impress as one of his generation's finest jazz talents. That he was able to fill Mehldau's shoes with ease, should go without saying.

The group started the evening with two pieces from the original album, "Mischief" and "The Oneness of Two (In Three)." The former is one of Redman's chirpy originals that gained momentum from a series of hits and punctuations before Blade's crash signaled McBride's muscular walking, four beat to the bar groove. The latter piece found Redman on soprano saxophone for a waltz meter that recalled parts of John Coltrane's "The Inch Worm" and McCoy Tyner's "Three Flowers."

After hellos and introductions, Redman discussed the quartet's return to the studio some twenty-five years later for RoundAgain (Nonesuch, 2020), the long-awaited follow up to MoodSwing. The rest of the evening would include compositions from this later effort. The first of these, "Undertow," would illuminate the maturity in Redman's composing. Almost striking a classical pose, the piece's rising and falling lines spoke in unison with Fortner's right hand. By contrast, the rollicking "Right Back Round Again" found Fortner reveling in the high-octane swing provided by Blade. McBride's own solo was virtuosic, one passage of 16th note triplets almost inducing a collective gasp from the audience.

McBride continued to take center stage for his clever piece "Floppy Diss." Redman's soprano synched with the bassist's double stops, while another creative solo statement found McBride shifting the beat emphasis, which sagacious listeners spotted and chuckled about instantly. Trading eights with Blade, McBride would slyly quote the melody to the theme from "The Odd Couple."

Acknowledged for his writing as much as for his musical drumming, Blade's own "Your Part to Play" spoke in rumbling tones, with mallets on tom toms and a rubato delivery by Redman. As the intensity increased, Blade was visibly reaching for subsequent sounds and textures, shifting up and down from his drum throne. Very skillful at pacing a set, Redman took the quartet through the optimistic "Silly Little Love Song" before taking their leave of the stage.

The capacity house insisted on an encore, with the group quickly obliging. "The Deserving Many" would be a swinging tenor vehicle that Redman described as basically 'a reboot of "Rhythm Changes."' Fortner, whose incendiary playing gave the set an energized stance, was clearly mesmerized by Redman's solo, leaning on his piano bench at one bench and soaking it all in. It would be a fitting end to an evening that reminded us of how vital mainstream jazz continues to be in the hands of the masters.