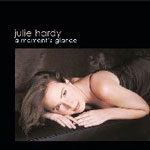 Julie Hardy's first album, A Moment's Glance, is a good representation of the hard-working jazz vocalist as she pursues frequent appearances in lower Manhattan's jazz clubs with her working band.

Hardy is New Hampshire-educated and received a Masters in Jazz Performance from the New England Conservatory in 2001. A year leter, she was one of two nationwide vocalists selected for the Jazz Academy Snowmass in Aspen, Colorado. In 2003, Hardy placed in the Top Ten, from a field of 200 applicants, in the Jazz Connect Vocal Jazz Competition and the Betty Carter Jazz Ahead held at Washington D.C.'s Kennedy Center. She has worked with Fred Hersch, Sheila Jordan, and Rebecca Paris and is inspired by the work of vocalists Dominique Eade and Luciana Souza as well as trumpeter/composer John McNeil.

Hardy utilizes a well-chosen list of eight tunes to showcase her singing and compositional abilities. The standards are well served by Rob Stillman's tenor sax filigrees and solos as he prods the singer on in songs both tender (the Lennon-McCartney "And I Love Him") and up-tempo (Cole Porter's "It's All Right With Me"). Pianist Randy Ingram's sympatico accompanyment and solos are also well represented. The Rodgers & Hart classic "My Romance" and Schwartz & Dietz tune "Haunted Heart" round out the Great American Songbook; Hardy's sensitive delivery on a rarely heard vocal version of the latter makes it the best piece on the album.

The remaining tracks are all Hardy originals. "No Turning Back" begins as a balladic duet with Ingram and then picks up tempo and heat as Stillman and the group join in with Hardy's vocalese. The title track sounds like a potential jazz ballad in the making and was inspired by an album by pianist Fred Hersch and vocalist Norma Winstone. "Growing" features Hardy's lyrics, along with her ability to provide meaningful vocalese. The closer, "Real Lies," is all vocalese, with tasty work from Ingram and Stillman.

Visit Julie Hardy on the web.

And I Love Him, No Turning Back, My Romance, A Moment's Glance, It's All Right With Me, Growing, Haunted Heart, Real LIes