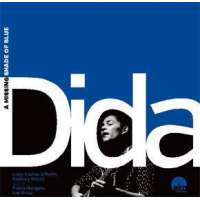 Guitarist and vocalist Dida Pelled previous Red Records release, Dida Pelled: Plays and Sings (Red Records, 2011) was one of my pics for Best-of-the-Year in 2011). That recording was so refreshingly organic that it has remained in my listening rotation since that time. Pelled snuck in a self-produced Modern Love Songs (2015) between Plays and Sings and the present A Missing Shade of Blue. It is as exceptional as the first recording. That said, expectations for A Missing Shade of Blue are necessarily great.

Organic. I like to use the word to describe music made with a minimum of effects and sonic engineering. Music that is like the tomato you picked off the plant in your back yard in the middle of July that is acidy tart and sporting a "realness" that is light years away from what you get at the local Walmart. It is music that is tactically genuine and real. That is the music that Dida Pelled plays. It is robust, with a freshly scrubbed sound that is both basic and advanced. Pelled is not going to dazzle you with technique save for than which is valued for what not is played. She has a Miles Davis-Count Basie bluesy brevity to her playing that makes her music irresistible.

Pelled steps out on A Missing Shade of Blue, moving well beyond the comfort zone of most jazz guitarists. Bravo that she slays the Ashford/Simpson classic "I Don't Need No Doctor" (yes, that one that Humble Pie rode to fame on Performance Rockin' The Fillmore (A&M, 1971)). But that is only the beginning. She plays a plaintive slide guitar on "Take These Chains from My Heart" and "500 Miles." This is grandly cast music, even in a jazz organ trio made up of Pelled, organist Luke Carlos O'Realy and drummer Rodney Green. This is not the 21st Century anemic attempt to capture the greasy funk of 1960's organ jazz. No, this is Pelled claiming a stake while coloring in the lines better than Wes Montgomery and Jimmy Smith.

Provocatively, the CD sleeve notes, "Dida Pelled, Guitar," which seemed curious as she both plays and sings on her previous Red Records release. It is a bit of a teaser, but Pelled does sing on the two dream-related cuts, "When I Grow Too Old To Dream" and "I'll See You In My Dreams," both showing off Pelled's remarkably plaintive and stripped down voice, full of scrubbed simplicity and genuine pathos. on "I'll See You In My Dreams," Pelled accompanies herself with her full-voiced finger- picking to a stunning solo effect. Before hearing this, I was unsure she could out-do the over-the-top creativity of her take on Johnny Cash's "Folsom Prison Blues."

Pelled cameos trumpeter Fabio Morgera and flautist Ital Kriss on Morgera's "Ultramarine," the sole bebop piece on the recording that makes a great argument Pelled's bona fides as a grand bop interpreter. As for Kriss, the flute solo on "When I Grow Too Old to Dream" is a masters class in the blues that is spectacular. Pelled is a controlled and specific artist who focuses on the simplicity of her task at hand. She digs deep into the American Southern Vernacular, extracting the blues, gospel, and country notes that swirl together like smoke formed from a fire rising.

Sundown; I Don’t Need No Doctor; When I Grow Too Old to Dream; Take These Chains from My Heart; Folsom Prison Blues; It’s a Sin to Tell a Lie; Glide On; A Little Walk on Jane Street; A Missing Shade of Blue; Blue Moon; Five Hundred Miles; Ultramarine; I’ll See you in My Dreams.