Luke Carlos O’Reilly has always had a passion for music. Whether it be Jazz, Soul, R&B, Gospel, Latin Jazz, Classical or any other genre, Luke was drawn to good music at an early age. When he was four years old, he and his mother started taking group piano lessons together. By age ten he had began to study the saxophone as well. It was the introduction of Oscar Peterson’s music at the age of fourteen that steered Luke in the direction of Jazz. Until then, Ray Charles, Stevie Wonder, James Brown, Earth, Wind and Fire and Otis Redding had been his heaviest influences.

Through years of practicing and support from his family, Luke became well known on the music scene in the Boston area, where he spent most of his childhood. Before the age of 17, through his high schools music program, Luke had been given the opportunity to play with Clark Terry, Joshua Redman, Walter Blanding, and Steve Turre, as well as to play on a 15 day tour in Europe. He also took part in several international music festivals at Berklee, IAJE, and University of New Hampshire as well as participating in All-District and All-State competition bands.

After graduating from Lexington High School in Massachusetts, Luke moved to Philadelphia, Pennsylvania to attend Esther Boyer School of Music at Temple University on a academic and music scholarship. There, he studied under Terrell Stafford, Mulgrew Miller, Bruce Barth, Tom Lawton and many other world renowned jazz educators. Before graduating in 2004, Luke had fully immersed himself on the Philadelphia jazz and r&b scenes. While in school and after graduating, he recorded and toured with Curtis Fuller, Dave Valentin, Billy Paul, Slide Hampton, Nicholas Payton, Fred Wesley, Red Holloway, Steve Turre, Musiq Soulchild, Carol Riddick, K’naan and many others.

In 2011, Luke independently released his debut solo album, ‘Living In The Now’. The album featured several of his own compositions, as well as a few arrangements on some popular standards. Playing with Luke on the album are several of Philadelphia and Brazils finest musicians. The album has nearly sold out.

At the end of 2013, Luke released his second independent album, ’3 Suites’. This album contains three very distinct elements: Songs composed by Luke’s trio, creative arrangements of some unusual covers featuring a vocalist, and. a cluster of compositions written by recently deceased jazz pianist George Duke, Cedar Walton and Mulgrew Miller.. At this time, Luke can be found traveling up and down the east coast playing with other artists as well as playing with his own groups. He plans to continue writing, performing and recording, and hopes to be able to further his work as an educator. Show less 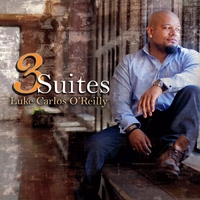 All About Jazz musician pages are maintained by musicians, publicists and trusted members like you. Interested? Tell us why you would like to improve the Luke Carlos O'Reilly musician page.