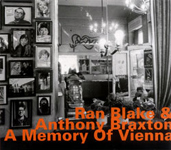 On November 19, 1988, a few days before the Cool Noir music festival in Vienna, composer Franz Koglmann finished recording Orte Der Geometrie (Hatart) with his Pipetet a couple hours earlier than expected. A number of high profile artists and musicians were in attendance for the festival, so efforts were made to utilize the remaining pre-paid studio time. Pianist Ran Blake was on hand, as a special guest of the Pipetet, and composer/multi-instrumentalist Anthony Braxton had just stopped by the studio. The idea of recording Blake and Braxton as a duo arose, inspired in part by their duet on the pianist's album Rapport (Novus), made ten years earlier. Writer Art Lange assumed the role of session producer and selected a collection of standards for the pair to work on—two and a half hours later, A Memory Of Vienna was complete.

Ranging from such chestnuts as "You Go To My Head" and "I'm Getting Sentimental Over You," to bop archetypes like "Yardbird Suite" and "Four," the duo waxes poetic, interpreting eight venerable classics with respectful restraint and a few unorthodox twists. Braxton plays alto saxophone exclusively on these timeless songs, plying sonorous phrases that are among his most lyrical. Occasionally launching into brisk staccato runs, he avoids signature extended techniques like altissimo, multiphonics and over-blowing entirely, playing it straight by sticking close to the harmonic center of the tunes. Blake ranges slightly further afield, dropping icy accents and dissonant clusters at unusual intervals without veering too far beyond conventional melody and harmony. Although his oblique cadences and re-harmonized chords are somewhat ambiguous, he never fails to swing, lending the date a far more nostalgic air than one would have expected from such a pairing.

Though admired for their uncompromising, avant-garde innovations, the most surprising aspect of the session is not the duo's relative lack of cacophonous pyrotechnics, but the incredible level of intuitive empathy and conceptual foresight displayed—despite the ad hoc nature of the recording. A Memory Of Vienna demonstrates Blake and Braxton's longstanding reverence for standard material, bringing new life to timeless classics with understated creativity and soulful conviction.

Visit Ran Blake and Anthony Braxton on the web.

'Round Midnight; Yardbird Suite; You Go To My Head; Just Friends; Alone Together; Four; Soul Eyes; I'm Getting Sentimental Over You.