Ruslan Sirota: A Lifetime Away

By MACKENZIE HORNE
October 27, 2019
Sign in to view read count 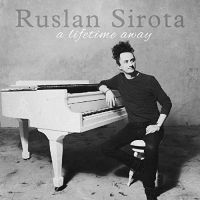 The Ruslan Sirota who engineered A Lifetime Away (Ruslan Sirota, 2019) has been years in the making. Sirota, who tends to view growth in terms of saying the most with the least, has developed an objective sophistication since the release of his self-titled debut record in 2011. More unified in mind and spirit, he has manifested an internal transformation into his work.

Sirota displays athleticism at the piano, quickly pivoting between influences with robust musical stamina. Equal parts Chick Corea and Sergei Rachmaninoff mixed with Keith Jarrett and J.S. Bach make up the bedrock of this little-album-that-could. Sirota deliberately sets out to accomplish the feats of heroes who came before him. By removing needless flair to create a more direct conduit to his audience, he is able to transform an intimate personal narrative into a more universal experience. One chapter of this personal narrative is addressed on the track "Father to Me" featuring Stanley Clarke, who looms large in the pianist's origin story as the force that ultimately pulled him to the West Coast in 2004.

Between his distinct compositional voice and style of execution, it would be easy to overlook Sirota's intelligence in terms of his ability to assemble a group of musicians. The personnel list sprawls. The record occupies that mystical middle ground; each composition is performed with disarming intimacy on a movie soundtrack scale. "Bee's Knees" and "Âme Agitée" have the vividness and intricacy of Kenny Wheeler's compositions for larger ensembles while "A Lifetime Away" sounds like an excerpt from a Jean Renoir war film score.

Conceptually, the record moves like human memory, underscored with ebbs of sobriety and flows of exhilaration. Nostalgia is the main vehicle and Sirota treats memory with the utmost attentiveness. He has a varied touch, floating between light-as-a-feather and as deliberate as a mallet on centuries-old church chimes. These shifts reveal surprising colors, textures and temperatures that ultimately make the record's emotional transitions very clear without becoming dogmatic.

For the immensity of his musical vocabulary, Sirota remains an unselfish songwriter. As he matures professionally, he entrenches himself more firmly in the belief that saying more by saying less is the ideal in terms of musical communication. His writing is tailored to the utterly exceptional musicians around him and he is confident enough in his message to leave gaps when necessary. There are several points throughout the record where Sirota's gentle lines are swallowed up by expanding string runs, resulting in a gorgeous symbiosis.

Bee's Knees; These Moments; Âme Agitée; A Lifetime Away; Picardy; That Time Again (Christmas at the Grove); Brazil; Tashi Tashi; Father to Me; In the Beginning; Demure; Evening in the Harbor (Russian War Song); My Silence.

Title: A Lifetime Away | Year Released: 2019 | Record Label: Self Produced