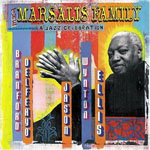 The Marsalis family could arguably be called the first family of modern jazz. The name needs no introduction to people who know music, and in particular, jazz music. From the more recognizable names of Wynton and Branford, to the lesser known, but also talented siblings, Jason and Delfeayo; on August 4th 2001, the brothers aligned professional and personal schedules to honor, celebrate, and perform in a concert with their esteemed father: Ellis Marsalis.

A patriarch of gifted jazz musicians, Ellis is also the key to the family's fortitude, inspiration, and love for the music. A stellar musician in his own right; Ellis has faithfully carried the torch, by performing, recording, as well as educating the public on jazz music.

The event and ensuing concert celebrated Ellis’s retirement from the music faculty at the University of New Orleans and the establishment of a chair in his honor. Some of Ellis’s students have included trumpeters Terence Blanchard, Nicholas Payton; and saxophonist Donald Harrison.

With limited practice time, the concert speaks volumes to the tremendous talent and scope the family possesses. The pieces range in style and group settings, yet each is marked with exceptional musicianship that has become the Marsalis trademark. The concert highlights many compositions written by Ellis, such as the spirited “Swinging at the Haven” and the ultra cool “Nostalgic Impressions,” which reveals Ellis to be a true jazz modernist.

Each family member gets a chance to collectively and individually strut their stuff throughout the concert. Wynton and Branford engage in a friendly spar on the burner “Cain and Able,” which features some of the tightest dueling solos from the two on record. Delfayeo’s warm and powerful trombone voice shines on the bluesy “Sultry Serenade,” while Jason delivers a truly memorable drum solo on “The Surrey with the Fringe on Top.” The bassist for the occasion was the talented Roland Guerin, who has performed with the family over the years. Special guests include Lucien Barbarin on trombone and popular singer Harry Connick Jr. on the blues ballad “Saint James Infirmary.” The concert ends with the family going back to the roots of their home town of ‘Orleans with “Struttin’ with Some Barbecue.” It proves to the audience and listener that the family that swings together can definitely have fun together. A Jazz Celebration is a special event that celebrates the music of a unique family whose rich musical gifts continue to shine.

Visit Marsalis Music on the web.

The concert will air on PBS Television on Febuary 20th . Check your local listing