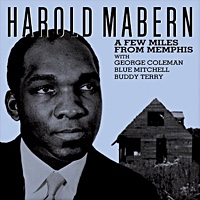 The relative dearth of dates as a leader by pianist Harold Mabern is an enigma—one made even more puzzling by the quality of this disc, a reissue of his first two records. Mabern was already in his 30s, possessing a well developed style, when he recorded these albums in 1968, and thanks to his considerable abilities as a composer and arranger, the tunes are superior to most of those heard on the many Prestige blowing sessions of this era. The first date, from which the disc takes it title, is a two-tenor outing with George Coleman and Buddy Terry up front and Bill Lee (bass) with Walter Perkins (drums) in the rhythm section.

Although half of the program is comprised of somewhat simple soulful blues like the title track, "Walkin' Back, and "Syden Blues, Mabern's harmonic acumen and keen use of the saxophonists' contrasting sounds imparts a satisfying variety and discernible depth to the music. Additionally, the superbly swinging bossa nova "A Treat For Bea and mournful ballad "B & B (for Booker Little and Clifford Brown) are exceptionally beautiful compositions, both worthy of reexamination. And Mabern's arrangement of "There's A Kind Of Hush is a model of melodicism that overcomes the triteness of Herman's Hermits' Top 40 hit.

The disc's second session, originally issued as Rakin' and Scrapin', is a hard bopping quintet date on which the brilliant trumpeter Blue Mitchell shares the front line with Coleman and the excellent drummer Hugh Walker joins Lee in the backcourt. Mabern's original title track is a funky gospel blues in long meter on which Mitchell soars and Coleman digs in, before Mabern spreads out with both hands flying. "Such Is Life, another superbly lyrical Mabern ballad sprinkled with some unusual piano flourishes, is followed by "Aon, a Spanish-tinged burner by the leader in the Horace Silver tradition.

Mabern's arrangement of "I Heard It Through The Grapevine, an obvious attempt at commercial appeal, is somewhat dated by Walker's repetitive dance rhythm but does feature some appealing electric piano. The concluding "Valerie is a piano trio feature with Mabern demonstrating his virtuoso technique and signature commanding parallel octave playing, before engaging in a series of exciting exchanges with Walker.

A Few Miles from Memphis; Walkin' Back; A Treat for Bea; Syden Blue; There's Kind of Hush; B&B To Wane; Rakin' and Scrapin'; Such Is Life; Aon; I Heard It Through the Grapevine; Valerie.