BY ROBERT IANNAPOLLO
November 11, 2008
Sign in to view read count 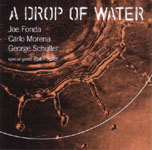 The rhythm team of bassist Joe Fonda and drummer George Schuller has proven to be a particularly potent one. Their work as half of Conference Call (alongside reed player Gebhard Ullmann and pianist Michael Jefry Stevens) gives that band both compositional and improvisational strength. The same holds true in guitarist Michael Musillami's trio, where they take care of stoking the fires while Musillami takes off on his improvisational flights.

A lesser-known group with a pair of records behind them is Fonda's trio with pianist Carlo Morena. Although an inveterate modernist, favoring the dissonant and devising compositions that take the improviser to the outer fringes, Fonda seems to have a penchant for working with pianists with a strong melodic streak, as evidenced by his 15-year collaboration with Michael Jefry Stevens. Morena clearly falls into this camp. A Drop Of Water is the trio's third recording and while the original drummer was Jeff Hirshfield, Schuller now seems comfortably ensconced in the drum chair.

The program leads off with one of Fonda's most effective compositions "The Wish" (it was the title track on the first Fonda/Stevens album), a piece surprisingly strong on melody with a couple of rhythmic trip-ups, which Morena seems to relish. The latter's "Spacey" is his most substantive piece with he and Fonda playing the theme as Schuller flails away like a perpetual motion machine. Schuller's compositional contribution is "Mirror Images," a slowly unraveling line played in tandem by Morena and Fonda, punctuated by full harmonic chordal bursts. It has an almost Paul Bley-ish quality in its meandering line and Morena plays off it well.

There's also a detour into free improv-spoken word on the title track with recitation by Ilse Pfeifer. A Drop of Water is a strong mainstream/modern piano trio date that finds many avenues to explore within the format.

The Wish; Paert; Mirror Images; A Drop Of Water; Moglichkeiten; Looking For The Lake; Spacey; Voila, La Tendresse; Song For My Mother.