By DAVID RICKERT
November 19, 2006
Sign in to view read count 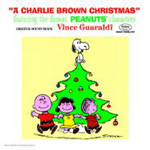 If you were born in the sixties or later, there's a good chance that your first exposure to jazz was through the Peanuts Christmas special. Today the whimsical music of Vince Guaraldi seems inseparable from this holiday classic, but it almost didn't happen that way; producer Lee Mendelson originally envisioned either Dave Brubeck or Cal Tjader writing the score, even though CBS felt jazz was unsuitable for a cartoon show. Fortunately the show as we know it took place, giving us not only Guaraldi's best work, but one of the best jazz albums ever in concept and execution to emerge from the West Coast scene.

Concord has reissued the original 1966 version of the soundtrack to A Charlie Brown Christmas for the holidays with remastered versions of the classic tracks and a few alternates. The original CD version from OJC was long due for tweaking, and this new reissue features crisp new sound with a great deal more depth and warmth ("Linus and Lucy, for instance, has a bowed bass in the head that I had never noticed before on the old CD). Of course all the classics are still here. Guaraldi originals like "Skating and the beautiful "Christmas Time is Here sit comfortably next to breezy versions of holiday classics such as "Greensleeves and "O Tannenbaum.

The extra tracks are merely alternate takes, and unfortunately not extra tracks left off the original release (even though there are songs on the special that aren't on the CD.) In this case, though, the alternates are worthy additions to the playlist; "Christmas Is Coming features an extended piano improvisation and "Greensleeves is given a bossa nova beat (albeit to lesser effect.)

Guaraldi would have been a marginal player in the San Francisco scene had the Peanuts specials come along to bring about his best work, and this remastered CD sounds even better than the original.