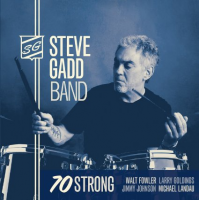 Since the 70s, Steve Gadd has pretty much seen it and done it all, and recognized as one of the most influential drummers of the modern era, spanning numerous musical genres. His slippery cross-sticking between the hi-hat and snare drum amid new ways and means to generate a funk groove, along with his famous drum solo on the title track of Steely Dan's 1977 landmark album "Aja," are just a few noteworthy accreditations of a distinguished career. For example, he's performed on seminal jazz fusion albums for guitarist Al Di Meola and keyboardist Chick Corea while navigating tricky time signatures with the greatest of ease. Thus 70 Strong is a celebration of his 70th birthday as he performs with an all-star crew on an album that is a bit more up-tempo and briskly in the pocket than the rather discreet and probing, Gattitude (BFM Jazz, 2013).

The band locks into a loping and gradually ascending soulful, jazz funk motif on the title track of keyboardist Jan Hammer's (Mahavishnu Orchestra, Jeff Beck) jazz fusion classic Oh, Yeah? (Nemperor Records, 1976). Guitarist Michael Landau launches the piece with a rhythmic picking vamp, outlining the primary theme as Gadd lays down a rather suave groove leading to trumpeter Walt Fowler and Larry Goldings' (Fender Rhodes) sleek rendition of the principle melody. The soloists trade fours and raise the pitch as the guitarist ups the ante via heavily distorted sustain lines, where the frontline steps into the upper-register and even mimics Hammer's famous, recoiling synth riffs. Here and throughout, it's safe to say that the musicians' shimmering enthusiasm impel the celebratory nature of Gadd's 70th birthday and magnificent career.