By Chris Mosey
November 9, 2017
Sign in to view read count 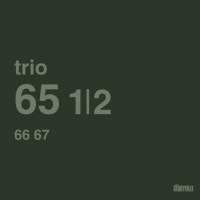 The somber shade of Bill Evans hovers over this album, recorded 1966-67, by three of his fans, Danish musicians, Kenneth Knudsen (keyboards), Ib Lund Nielsen (bass) and Ole Streenberg (drums), who went under the collective moniker Trio 65 ½.

This title, coined by drummer Streenberg, is a play on the title of Evans' 1964 Verve album, Trio 64. So did these young, inexperienced Danes really think they were 1½ times better than the peerless Bill? Probably not. No doubt high on life itself, like a lot of other jazzers in those days, the trio were just happy to be doing their thing and staying clear of playing variety on local TV.

They feature one number—"Santa Claus Is Coming To Town"—from the Evans album, along with three songs closely associated with their idol, "Stella By Starlight," "There Will Never Be Another You" and "Someday My Prince Will Come."

Also, anxious to show how hip they were, they included three compositions by John Coltrane, "Bass Blues," "Naima," the lovely ballad 'Trane wrote for his then wife, and "Bessie's Blues," the only up-tempo track on the master's 1964 album Crescent.

Trio 65 ½ were big in Denmark in the 1960s. They won jazz competitions and, according to their publicity, were "the talk of the town" and "incredibly talented musicians."

With almost patriotic fervor, the same publicity trumpets, "This album is proof that Danish avant-garde jazz from the 1960's was at an international level, and it deserves to be listened to—both due to its historical value, but also its significant and extraordinary sound."

Well, that's as maybe but this is a pleasant enough album that will no doubt fill many Danes with nostalgia for those good old days. No harm in that. Though outsiders will no doubt wonder what all the fuss was about.

An interesting inclusion is "Why Not? That's What!" a quirky number by Oscar Pettiford, the great native American bassist, who was living in Denmark at the time.

It features a solo by drummer Streenberg who, in the decade that followed, forgot about Bill Evans and joined Knudsen and saxophonist Karsten Vogel in the successful Scandinavian rock band Secret Oyster.

Bit; Ras Bros; Stella By Starlight; There Will Never Be Another You; Juleballade; Tja; Bass Blues; Why Not? That’s What!; Naima; Bessie’s Blues; Santa Claus Is Coming To Town; Some Day My Prince Will Come.