By Mark Corroto
December 25, 2017
Sign in to view read count 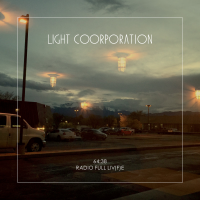 Few musicians or bands exhibit imperturbability to the degree that the ensemble Light Coorporation (yes, that's how it's spelled) does. The Polish band, founded by guitarist Mariusz Sobański in 2007, has released its fifth recording 64:38 Radio Full Liv(f)e. This is a recording of a live date dedicated to jazz pianist and composer of film scores, Krzysztof Komeda, who is best known for the soundtracks to Roman Polanski's Knife In Water (1962) and Rosemary's Baby (1968).

Listening to this disc requires patience, as each of these seven tracks gradually expand upon themselves—marrying theme with improvisation. The themes are taken from the band's previous recordings, Rare Dialect (RéR, 2011) and About (RéR, 2013), and broadened with the addition of vibraphonist Mariusz Gregorowicz, who joins Sobański on guitars, tenor saxophonist Paweł Rogoża, bassist Krzysztof Waśkiewicz, and drummer Miłosz Krauz. Contemporary comparisons might be made to Godspeed You Black Emperor!, Explosions in the Sky, and A Silver Mt. Zion. Or, one could even harken back to the experiments of Pink Floyd to find the origins of Light Coorporation. Their fusion of progressive rock with an improvised jazz language is part hypnosis and part fugue state. The sounds are a painless excuse to get lost in the trance of spacey guitars, echoey saxophone,s and the pulse of vibraphone chimes and insistent bass notes.