BY DON PHIPPS
September 1, 2018
Sign in to view read count 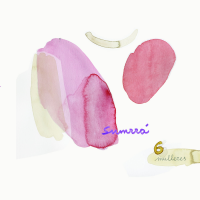 Throughout the history of jazz, musicians have looked to figures inside and outside of music for inspiration. In this tradition, the Spanish trio Sumrrá created their album, 6 Mulleres, as an homage to six women from the recent past and contemporary times who rose up and successfully challenged prevailing archetypes. Sumrrá indicates on its website that the album is a ..."21st Century contemporary musical approach to feminism." The album is an ode to positive change.

But it is also much more than that. Dignity pervades each composition, as if through the compositions and musical interpretations, one can experience the challenges these women faced as they sought justice. It is music of reverence, beauty and sadness all rolled into one.

Bassist Xacobe Martinez Antelo composed all tunes but one, the lone exception being "Masala Yousafzai," which was written by pianist Manuel Gutiérrez Iglesias. All of the pieces offer probing and emotionally rewarding musical themes, melodies and phrases. And all of the pieces feature the exquisite drumming of LAR Legido, who manages to find the right balance between control and intensity.

"Frida Kahlo" kicks off the album with an edgy rock-like repetition of notes by the bassist and Iglesias' left hand while the right hand carries the theme as single notes. There's a brief break featuring a twangy bass solo and then Iglesias takes over with a line that climbs and swirls over the beat. In this number, and on other numbers throughout the album, Iglesias seems to prefer single-note attacks while his chords suggest modal jazz. Legido keeps a solid but understated rhythm. Antelo provides a probing bass solo as the piece winds down.

There's a cloud-forest beauty to "Malala Yousafzai," like the summit of a tree-lined mountain path where all below can be surveyed. Legido's cymbal work is highlighted above Iglesias' lyrical exploration. Iglesias adds an ostinato Keith Jarrett-like phrase. The piece ends back where it started, perched high above a mountain gorge.

In "Rosa Parks," Legido's syncopated attack complements the funky piano phrasing. Then the piece rolls out with almost McCoy Tyner-like energy. The phrases feature sharp contrasts—funk and elongated phrasing alternate. Iglesias hops aboard a bluesy lick of individual notes and full chords as Legido provides power underneath. There is amazing synchronicity between piano and drums while Antelo holds the structure together with his bass lines.

"Qui Jin" has a Latin feel. The bass pivots against the piano, and Legido uses the cymbals to frame the beat. The bass then walks, switching to a salsa rhythm. Iglesias takes over with a solo of single notes above chordal changes. The playing is intense and the improvisations are tight and fiery. The piece disassembles into a kind of splash, as drums, piano, and bass bowing go into free fall together.

The syncopated piano and bass opening of "Nawal El Saadawi" features Iglesias' right-hand single note attacks as his left generates a rotating, haunting pattern. Then the left takes over the melody. The beat thumps like a human heart. Legido's work is especially noteworthy throughout the piece, as he adds and embellishes the sparse melodic phrasing with all-over drumming. The effect is a beautiful song that gracefully advances to its conclusion.

Sad but poignant, "Rosalia de Castro" suggests a lone walk along the seashore, pondering the beauty and the sadness of existence. It begins with the bass playing single notes under piano chords. Subtle yet intense, the song's impact is heightened by Iglesias' attacks and Legido's drumming.

Though certainly skilled, Sumrrá's music on 6 Mulleres is not about technique. It is about how technique can covey deep emotions and reverence for historical and contemporary figures who have fought for change. As is true of those movements that have altered human history, these compositions speak to progress under duress, a kind of fearlessness in the face of overwhelming odds. The talented trio brings these musical dedications to life. This is significant music. Highly recommended.