BY KARL ACKERMANN
August 8, 2019
Sign in to view read count 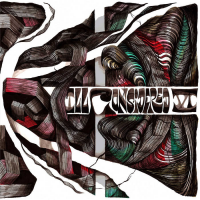 The London-based quartet, Ill Considered, has churned out nine full-length albums in less than two years, each high quality and each a unique jazz creation. Founded in 2017, saxophonist Idris Rahman, drummer Emre Ramazanoglu and bassist Leon Brichard replaced their additional percussionist with Satin Singh on their second release, Live at the Crypt (Self Produced, 2017). Rahman and Brichard had recorded in a short-lived group called Wildflower; that trio bearing more than a passing similarity to the style of this lineup. On 6 the quartet expands to a quintet with Steve Ashmore on guitar on many of the nine tracks.

Rahman, the driving force behind this otherwise leaderless group, originally played with groups leaning toward Bengali folk music, Afrobeat and reggae. He played in the groups of popular British-Asian clarinetist and composer Arun Ghosh and London guitarist Jonny Phillips. He recorded with his Mercury Prize-nominated, pianist sister Zoe Rahman on her album Where Rivers Meet (Self Produced, 2012). Ramazanoglu has an extensive career inside and outside the recording booth. An accomplished composer, producer and engineer, he has worked in numerous capacities with top names in jazz and pop music including Keith Tippett, Alison Moyet, Marc Almond, Kylie Minogue, Carly Rae Jepson, Mark Ronson, Shakira and Sia. Brichard has worn multiple hats, writing, producing and acting in various technical functions with mostly home-grown talent. Most notably he has recorded with Malian singer-songwriter and multiple Grammy Award nominee Fatoumata Diawara and the U.S. Midwest group, The Fontanelles. Singh has over fifty album credits that span categories from alternative rock to world music.

The music of Ill Considered has elements of post-minimalism, hard bop and a great deal of free improvisation. 5 and 6 were released simultaneously but vary stylistically. While the former features fewer—and extended—pieces in a contemplative ambiance, 6 bristles with tension and antagonism while sharing those reflective qualities. It isn't an abrupt alteration from one piece to another but a skillfully executed amalgamation of approaches, as on "Lies" with its serene opening, detonated by the growl of Rahman's tenor, only to morph into a minimal bass solo. Similarly, "Gunning," "Ward" and "I Didn't" use these paradigm shifts to effect high drama in the midst of mesmerizing dreamscapes. "Waterfall" and "Percolator" represent an overall edginess atypical of the Ill Considered approach, adding to the diversity of the album; Ashmore produces gauzy, iridescent blasts, but at a distance that enhances the music rather than drastically altering the overall vibe. The two percussionists and Brichard's relentlessly driving bass anchor Rahman's knotted labyrinth of textures.

The music of Ill Considered is mystical and forceful in equal measure. The group works from a skeletal framework, mostly creating in real-time. Much of the Ill Considered catalog is comprised of live recordings and in those settings, the concentration of the musicians is evident. Rahman spends much of his stage time curled over the sax, almost becoming part of the instrument; his scorching squalls and nomadic sax reveries laying the foundation for enthralling grooves. All of the group releases are more than worthy of a listen and the self-titled debut and 3 are outstanding places to start. This is bold and highly recommended music from a very promising group.