By Nenad Georgievski
November 6, 2016
Sign in to view read count 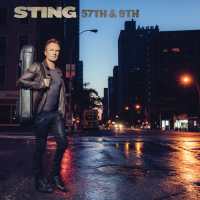 Throughout his long and illustrious career, Sting has enjoyed an enviable set of circumstances. Not only does he have total artistic freedom but he has been accompanied by elite musicians and has a devoted, global fan base. In return, that has yielded many artistic triumphs as he explored almost every genre known to man. He has been eclectic in his choice of inspiration which is filtered through an ever expansive musical worldview. That incorporates all kinds of sounds and music from pop and jazz to classical, medieval and world music. His new album 57th &9th reveals a restless and uncompromising creative spirit that makes music that still pulses with life and vigor.

Musically, 57th &9th is predominantly painted with the primal colors of rock music: rollicking drums, fizzing guitars and fluid bass lines. The first several songs roar straight out of the box. It's been a while since he sounded this energized and unfettered. Producer (and Sting's manager) Martin Kierszenbaum's sparse and raw production is a welcome change of pace for Sting whose previous work often slipped into the quiet, hushed and comfortable. The energy is tough and lean and he has never sounded this raw, urgent, and edgy since his early days with his band The Police. Sonically, this record does not break any drastically new sonic frontiers for him but these kinds of fast-paced rockier songs have been heard only occasionally on his records with "After the Rain Has Fallen" from Brand New Day (A&M, 1999) "All This Time" Soul Cages, ( A&M, 1991) as examples. The music is driven by a working band of many years and also welcomes other guests to make this recording special. While they rock and sound urgent they don't just bash it away. A band of this caliber is capable of stirring up wild grooves, but here they respond sensitively to Sting's vocal lines, dynamics and conjuring varying dynamics within the songs.

Most importantly, 57th & 9th is dominated by outstanding songwriting. It is another masterclass in the potential potency of lyrics, melodies, and performance from an enduring songwriting master. At heart, Sting is an unequivocally a soul singer and musician. He always sings with great conviction, always drawing you in the story, like having a conversation with an old friend of yours. In contrast to his previous output, the autobiographical and reflective The Last Ship, (A&M, 2013) Sting is utterly engaged in the present, dealing with subjects such as social injustice and the horrors of refugees ("Inshallah"), pondering about climate change and environmental issues ("One Fine Day") or contemplating the passing of colleagues and close friends such as singers David Bowie, Prince or actor Alan Rickman ("50.000") .

The quality of each song is consistently good with peaks and valleys in between. "If You Can't Love Me" is one of the many finest moments here. It is a tender mid-tempo ballad offered with the no-nonsense conviction that reveals love may be beyond the measurement of the rational. It's a love song that is achingly sincere without being invasive. The album closes, gorgeously, with a hushed ballad "Empty Chair" that deals with the subject of a loss. It's a song written for Jim: The James Foley Story, a documentary about a US journalist that was publicly executed by terrorists in Syria. The tone of the song is delicate and graceful. Sting's voice barely raises throughout, yet he manages to convey more emotion than ever before.

57th & 9th is a master course in songwriting. Sting has created timeless songs that feel organic, heartfelt and important now, but which will sound as magnificent in the decades to come as they sound today.

I Can't Stop Thinking About You; Fifty Thousand; Down, Down, Down; One Fine Day; The Pretty Young Soldier; Petrol Head; Heading South On The Great North Road; If You Can't Love Me; Inshallah; The Empty Chair.