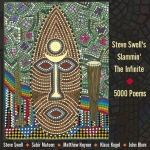 There was a time when the addition of a chordal instrument such as piano to a horn-led free jazz quartet would have been viewed as a nod to the mainstream. But not the case now and especially not when the pianist in question is John Blum and the group is trombonist Steve Swell's Slammin' The Infinite. Underground legend Blum stays on board for their fourth outing after his guest appearance on Live At The Vision Festival (Not Two, 2008) and it pays dividends.

Although a studio date, the fulsome 76-minute playing time permits a stretching out as if in performance. Part of Slammin's appeal lies in the trademark simultaneous blowing by Sabir Mateen's mellifluous reeds, ever ready to spiral beyond the treble clef into stratospheric falsetto, and the leader's rough-hewn yet finely nuanced trombone, bolstered now by Blum's careening piano. Even when not soloing the pianist's controlled abandon demands attention. On bass, Matt Heyner breathes life into riffs, quickly deconstructed once ingrained on the listener's consciousness and plots more abstract musings with bow in hand while drummer Klaus Kugel drives the ensembles yet also explores texture, as in his shimmering feature on "The Darkness Afoot."

In its round of solos, "Not Their Kind" introduces the band, with Mateen's opening foray, forged from concentrated tonal distortions, culminating in a dog-bothering whistle, a particular statement of intent. Notwithstanding Swell's punchy heads, "The Only Way...Out" could almost act as their manifesto: freeform ensembles spawning tension and release via energetic outpourings until a cathartic resolution. Further quicksilver interplay is everywhere: framed by the buoyant counterpoint of the two "Sketches" while "My Myth Of Perfection" contrasts dark mournful voicings with slow burning passion.

The album title alludes to a Walt Whitman essay suggesting that great art comes through perseverance, but, in fact, Swell's success rate is consistently high and with 5000 Poems the trombonist smashes another home run.

Not Their Kind; Sketch 1; Where Are The Heartfelt?; My Myth Of Perfection; The Only Way....Out; Sketch 2; The Darkness Afoot.