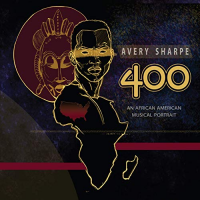 In 1619 the White Lion, a British privateer which had just successfully raided a Spanish slave ship, arrived in the Jamestown colony with its contraband cargo of twenty-some African slaves. Thus began the tumultuous legacy of the African American experience in North America—a four-hundred-year saga that bassist Avery Sharpe traces skilfully and poignantly on 400: An African American Musical Portrait.

Sharpe has never been reluctant to acknowledge the forces that have shaped him musically and culturally. His Legends and Mentors (JKNM Records, 2008) paid tribute to three of his longtime musical colleagues and teachers, McCoy Tyner, Archie Shepp and Yusef Lateef. But consider also his multiple efforts to draw deeply from the well of the black experience in America; projects like Extended Family II: Thoughts of My Ancestors (JKNM Records, 1995) and Epic Ebony Journey (JKNM Records, 2001) sought out the enduring traits of African Americans' resilience and fortitude, locating them within the profound resources of African culture and seeing their evolution through black Americans' various struggles and triumphs. However, those earlier albums seem a mere prelude to 400. This is truly Sharpe's statement record, with a sweeping historical vision conveyed through a well-defined series of ten musical vignettes that encompass four centuries of African American life. It is an ambitious undertaking, to be sure.

The album has a "family" feel, not only due to the presence of veteran associates like saxophonist Don Braden, drummer Ronnie Burrage, and pianist Zaccai Curtis, all of whom have collaborated previously with Sharpe. Just as important is the "Extended Family Choir," consisting largely of Sharpe's family members, who offer valuable emotional strength and musical heft on four of the cuts. His brother, Kevin Sharpe, directs the ensemble, while his niece, Sofia Rivera, has a particularly stirring turn on an emphatic spoken-word part on "Ain't Gonna Let Nobody Turn Me Around," Sharpe's take on the traditional civil rights anthem, which invokes the substantial history of African American protest from the Jim Crow period to Black Lives Matter. The choir's presence on the first two tracks, "Arrival" and "Is There a Way Home," is just as effective, offering a visceral articulation of the fear and foreboding that accompanied slaves' early lives in the colonies—along with the burgeoning sustenance for resistance they began to find by looking homeward to the African continent.

Sharpe's songwriting strategies are smart ones, utilizing a wide stylistic range to embrace as much of the African American musical tradition as possible. African rhythms and instrumentation (notably, Tendai Muparutsa on the djembe) enliven "Arrival" and "Is There a Way Home," while later historical moments see other idioms emerge. "Fiddler" has both classical and folkish elements, as violinists Kevin Zhou and Sophia Jeongyoon Han give a glimpse of slaves' nascent musical expressions, whereas "A New Music" signals the presence of early jazz through a stately rag from Curtis that segues into jaunty New Orleans swing. Through it all, a spirit of strength and endurance is undeniable, with moments of brightness which continually lighten the music. Guitarist Kevin Eubanks is an essential presence in this regard; even on "Arrival," a track that could easily succumb to despair, Eubanks' nimble acoustic flourishes suggest the possibilities of hope and potential, as they do on several of the cuts. Braden, too, has some energizing moments, soloing fervently on "Arrival" and undertaking a bop-based strut on "Blues and World War II."

Fittingly, the album's last track, "500," features strong modern jazz fueled by a post-bop sensibility. It points beyond the album's historical trajectory, both musically and politically, and makes clear that the African American story, like that of jazz itself, is a narrative that is very much still unfolding.

Arrival; Is There a Way Home; Colonial Life; Fiddler; Antebellum; A New Music; Harlem and the War to End All Wars; Blues and World War II; Ain’t Gonna Let Nobody Turn Me Around; 500.