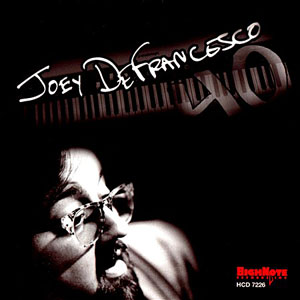 With 40, Joey DeFrancesco—the world's foremost contemporary jazz organist—heralds his fortieth birthday by presiding over a trio session that is typically dexterous and engaging from start to finish. As good as it is, however, a DVD would be even more persuasive, as DeFrancesco's consummate mastery of his chosen instrument should really be seen as well as heard to be thoroughly appreciated. His right hand is so virtuosic that he seldom has need for the left, using it sparingly to append an obligatory chord every now and then. Seeing and hearing DeFrancesco perform is a remarkable experience, one not to be missed.

On the other hand, simply hearing DeFrancesco in his element, leading a polished and enterprising trio, is quite a pleasurable experience in and of itself. On this studio date, recorded in June 2011, two months after he turned forty, DeFrancesco is as brilliant as ever, and is steadfastly supported at every twist and turn by drummer Ramon Banda and guitarist Rick Zunigar. Zunigar also adds a second solo voice, his laidback guitar in marked contrast to DeFrancesco's ebullient keyboards (the plural is necessary because the leader plays the classic Hammond B-3 on some numbers, the innovative digitally-designed Numa—especially created for him by Studiologic—on others; Pete Fallico's liner notes don't disclose which).

As for the music, DeFrancesco wrote six of the nine selections, the first three for his children ("Donny's Tune," "Ashley Blue") and wife, "Gloria." The others are Ray Charles' high-stepping "I Got a Woman" (DeFrancesco's earnest tribute to Jimmy McGriff) and the seldom-heard originals "One Hundred Ways" and "Caruso" (which should be heard more often). While there is ostensibly only one blues ("Bluz 'n' 3"), the truth is that almost every note DeFrancesco plays is submersed in the blues tradition, so there's an element of that genre even in straight-ahead burners like "Donny's Tune" and "Life Is Good" or ballads such as "Gloria" and "Caruso." DeFrancesco, who has been known to sing from time to time, does so once, on the heartfelt homage to Mrs. D, whose plainspoken lyric he apparently wrote.

When it comes to traditional organ trios, there aren't many—if any— that can reach this level, let alone sustain it from prelude to coda. Recommended? Without pause.