By Pascal-Denis Lussier
May 1, 2017
Sign in to view read count 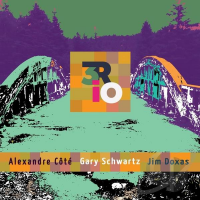 3rio is a connected-jazz project uniting Montreal-based saxophonist Alexandre Côté, guitarist Gary Schwartz, and drummer Jim Doxas (brother of saxophonist Chet Doxas), three feverishly-engaged musicians with extensive training and local to international playing experience, and whose love and deep dedication to jazz, from its roots and connections, have been firmly established, though this aspect could be deduced from this album alone, their first together, whether or not one is familiar with their other collaborations, projects, and the numerous recordings on which they appear.

The album, released Nov. 2016, offers three standards then three original compositions, and, between each, a short, fully improvised reflective interlude. However, the fresh factor for 3rio doesn't arise out of the compositions. Even if Schwartz' ballad, "The Cove," draws one into a pleasantly pensive mood or his "A Spaceman by the Beach" takes you down stimulating paths, the originals, including Coté's spry "You Remember Me," give off a familiar feel and all are too short to provide exploratory titillation on a sustained level for those who like to embark on thematic adventures.

This should not be interpreted to mean that the six compositions aren't interesting, far from, but it's not what sets this album apart from the mass. In fact, the album opener, the 1933 chart, "Close Your Eyes," can easily mislead many a listener to a quick another-generic-jazz-album judgment until they're carried effortlessly by its swing and what turns out to be a very personal and worthwhile rendition rather than a standard X does Y standard. This aspect is amplified with the 1940, "You Stepped Out of a Dream," and the thrilling counterpoint that's played out.

And there's the fresh: Given that it's a bass-less trio, that such a mix of instruments should deliver so high on rhythm and melody, even on surprises, managing to rise far above the many other similar attempts that make us feel incomplete somehow after a few tunes.

But that's because Doxas doesn't just keep time, he reacts to it as he sets the guide posts, always improvising as he lyricizes his own dimension; why need a bassist when you have this guy on drums? Coté stuns as usual as he breathlessly explores the fabric of his dimension, demonstrating the great control he holds over his instrument whether owning the lead or fading to background, and as much through restraint as fast flowing solos. Schwartz paints his dimension at times melodic, at times rhythmic, occasionally taking solo, often acting as supportive structure, sometimes expressed with a Barney Kessel-like chordal ability, sometimes a Wes Montgomery phrasing in mind, other times with a John Abercrombie tinge in his sound and spacing.

It's not a guitar album, nor a saxophone album; it's not about a style either, it's about three guys coming together, jazzing through its history, adapting their dialogue as needed for the good of the whole. It is not about who's leader and when, just tossing a ball back and forth. Hence why, here, all 3 dimensions fit together in a way that feels real, natural. Complete. Yet so free.

Which brings me to the cherry: Six brief entirely improvised bridges between the penned compositions, this aspect of the album reminiscent of later Bill Frisell live recordings. All six feed off what preceded it or what's to come, each very different, and all are strikingly coherently expressive and too short for the remarkable exploration and group cohesion displayed.

Two complaints, however. Firstly, there are what I'd qualify as fleeting missed opportunities, which I blame on Schwartz who, at times, seems keen on giving the younger musicians the spotlight rather than occupy all of his space during moments just begging for it. This is made most evident in the second standard, (Thelonious) "Monk's Dream," which would, despite the improvised breadth expressed, regrettably feature brief lulls if not for Doxas' ability to mystify us past them. However, these moments are rare, not jarring, and don't detract from the album's worth unless one is being hyper-critical. And, unfortunately, my main complaint concerns length. It's really a shame this album isn't longer, the longest chart sitting at only 5:26. I know these players would have no problem stretching these out with extended melodic explorations and well-placed solos. And those bridges... beyond sheer playing ability, together, these three can rule the unruly in spectacular ways. I shouldn't say this, but: Gimme more!

Nonetheless, it is in fact a well-balanced album that does deliver on excitement, making it a worthwhile addition to any jazz collection.

Close Your Eyes; Bridge 1; Monk's Dream; Bridge 2; You Stepped Out of a Dream; Bridge 3; The Cove; Bridge 4; You Remember Me; Bridge 5; Spaceman On The Beach; Bridge 6.