BY JEFF WINBUSH
August 7, 2013
Sign in to view read count 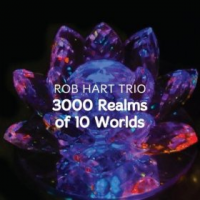 Drummers come in as many different flavors as ice cream and each and every one brings something different to the party: some are technicians; some are powerhouses; some are timekeepers; some are virtuosos; and some are innovators.

Then there are drummers like Rob Hart, who is comfortable in multiple categories and adds the title of "explorer" on 3000 Realms of 10 Worlds, with a strong interest in trying several different things at once. This makes for an album that is adventurous, albeit an uneven listening experience as some of Hart's ideas work well, while others come up short. The album opens strongly, progresses well through the middle, but stumbles and falters at the end.

Hart is capable of pounding away with power, as the opening of "I Will" demonstrates, but isn't at all reluctant to lay back and allow the various guitarists and keyboard players to take the lead. It's gutsy to cover Led Zeppelin's "Kashmir" and, while Scott Sorkin's guitar solo won't keep Jimmy Page awake at night, Hart doesn't embarrass himself in tackling a tune that featured the jackhammer drumming of the late John Bonham.

The undoing of 3000 Realms of 10 Worlds is, at 77 minutes, it is fatally overlong. Four tracks run over eight minutes long and while Hart has good ideas he doesn't have enough of them to prevent the nearly 17-minute slog through "Tis" and "Hellavicca" from descending into pointless riffing and jamming.

With some judicious editing and trimming, this could have been a successful bit of improvisation and experimentation, if only Hart the producer had throttled back on Hart the drummer and not given into excess. There's no reason this recording had to be this long but because it is, Hart fails to sustain the album's promising start.