By EYAL HAREUVENI
August 7, 2014
Sign in to view read count 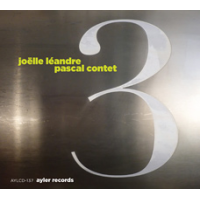 Like a conversation between old comrades, not much needs to be said in order to make perfect sense. The implied, fleeting body moves, facial expressions can direct the course of the interaction and charge it with emotional depth, tension or colorful cinematic narratives. 3 the third recorded collaboration between French double bass master Joëlle Léandre and accordionist Pascal Contet—after a self-titled album (Concord, 1996) and Freeway (Clean Feed Records, 2007)—feature these two friends in top form.

This intimate recording demonstrates how Léandre and Contet's free, associative improvisations blur the distinction between the immediate and improvised and a cohesive and coherent composition, even though it is devised in the moment. The topics of the conversation vary and shift constantly and its themes may dissolve suddenly into another, more urgent idea or reappear later on, but the close affinity and the spirit of two friends embracing each other with their expressive sounds linger on.

Both are free spirits who refuse to commit to any artistic conception or convention. They enjoy experimenting with weird sounds on "Soixante," testing its dissonance, applying inventive extended techniques including Léandre's voice, subverting any attempt to harness these sounds into a linear piece but eventually an inner logic to this bold and intense sonic experimental piece is found. Other pieces shed light on different aspects of this profound conversation. On the introspective "Vingt-neuf" both sound as if they are caressing and consoling each other, sympathizing with the emotional storm of the other. "Trente-trois," "Seize" "Trent-cinq" are continuous vehicles for poetic explorations of microtonal textures, so reserved that the two instruments almost unite into one voice. On the last piece "Cinquante-trois" the two conclude this emotionally deep conversational with a playful and polyphonic stream of ideas, motifs and sounds, finishing with a somber tone that marks a farewell until the next meeting.