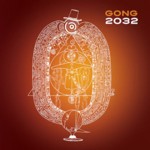 Forty years have passed since Gong united in Paris, one of the cultural aftershocks of the city's student riots in May 1968. 2032 brings them back from the future and splashes them down in the instrumental jam-band scene that they originally helped create with their unique blend of progressive rock and jazz instrumentals, experimental electronics, eastern/western fusions, and self-depreciating humor. "2032 is the year that the Planet Gong makes full contact with the Planet Earth, and a major new chapter in the continually evolving Gong mythology," founding member Daevid Allen (sort of) explains.

The whimsical pot-head pixies and other denizens of Gong's 1970s progressive jazz-rock mythology upload quite nicely into the digital age. So does the band's penchant for playing just about anything just so long as they manage to cram it into their musical galaxy: The racetrack "call to post position" ("Wacky Baccy Banker"), an Irish jig ("Dancing with the Pixies"), electric violin (from guest Yuji Katsui of the Japanese prog/jam band Rovo, on "Guitar Zero"). And of course no Gong album would be complete without the incantational, mystical space poetry and electronics of Gilli Smyth and Miquette Giraudy, which loosely frames the narrative for this journey to 2032.

The opening "City of Self Fascination" unfolds on large, sprawling electric guitar hooks and arena-sized drums; the surface of this sound, hard and brilliant like a diamond, slams into your ears. "How to Stay Alive" is first served in the chunk-style of New Orleans rhythm but expands to include the sound of dive-bombing electric guitars and an Armenian double-reed duduk played with all the frozen, ethereal cool of Miles Davis by returning, original Gong member Didier Malherbe.

"The Gris Gris Girl" blends stuttering rhythms, twirling flutes, and venom-spitting electric guitars into the progressive sound of bands such as Traffic, who approached jazz-rock from a different, more blues-based perspective. More electric guitars buzzsaw through the saxophone free-for-all in "Guitar Zero," which echoes the Mothers of Invention, while the sax freak-out in the closing "Portal" pushes even further and harder, and scorches its sound to a burnt crisp.

2032 also marks the first time that guitarists Steve Hillage and Allen have recorded together since they completed the band's famous "Radio Gnome" trilogy (Flying Teapot, 1973; Angel's Egg, 1973; and You, 1974; all for Virgin or an affiliate) in 1974.