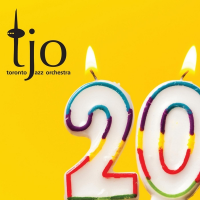 The name on the album—20—says it all: the world-class Toronto Jazz Orchestra has been presenting marvelous music in eastern Canada and beyond for twenty years and has marked the special anniversary by releasing the fourth in a series of admirable recordings that began in 2001 with Toronto Jazz Orchestra.

This time out, all the arrangements (and all but one composition, a revision of John Lennon and Paul McCartney's "Dear Prudence") are by the TJO's artistic director, Josh Grossman. The album's centerpiece is the four-movement "4 PN" (for Phil Nimmons), written in 2013 to celebrate the ninetieth birthday of one of Canada's foremost musician/composer/ bandleader/educators and, as Grossman writes, a "personal inspiration for more than twenty years." The suite opens with the well-grooved "Land of 2 and 4," spreads further charm on the brisk waltz "Under a Treeful" (showcasing clarinetist Paul Metcalfe), spotlights trombonist Chris Overton on the lustrous "Birdsong," and ends on yet another high note with the fleet and funky "Flat 10 Strikes Again" whose ardent solos are by altoist Jake Koffman and guitarist Todd Elsliger.

The album's sunny, calypso-infused opener, "Georgie and Rose," written for Grossman's children, features bright solo turns by Overton, pianist Carissa Neufeld and soprano Chris Roberts, presaging embroidery by a wordless sidemen's chorus. "Brad's Prudence," which follows, is based, Grossman writes, on pianist Brad Mehldau's performance of "Dear Prudence" on his album, Largo, and brings to the fore trombonists Overton and Patrice Blanchard along with Neufeld's urbane Fender Rhodes. The suite for Nimmons is followed by the album's change of pace, "Reflection," whose elaborate phrasings and slow-paced tempo serve as a springboard for earnest statements by Neufeld and tenorist Chris Hunsburger.

The funky vibe returns on "The Blob," on which drummer Ben Ball secures the driver's seat to set the stage for sturdy solos by Metcalfe, trombonist Mark Grieve and bassist Mark Godfrey. The rocking finale inscribes a congenial signature on an historic centenary that should leave most listeners wishing for at least 20 years more.