Bassist Mark Godfrey is quickly becoming one of the new faces in Canadian jazz. Hailing from Southwestern Ontario and currently living in Toronto, he has established himself a mainstay in this national community and was named the 2019 Emerging Jazz Artist by the Toronto Arts Foundation. Composing and performing for many years with his contemporary jazz group, Pram Trio, Mark’s work as a co-leader, bassist, and composer has garnered international recognition. In 2014, this group was awarded the Grand Prix de Jazz from the Montreal Jazz Festival and has performed as a feature artist at jazz festivals across Canada including those in Victoria, Vancouver, Calgary, Toronto, Ottawa, Montreal, Halifax, and Rimouski.

Following the release of Pram Trio’s most recent album in 2016, Mark began composing for five-piece jazz ensemble and in 2017 started the Mark Godfrey Quintet. This group released their debut EP “Prologue” in 2018, and in February 2020 will be releasing their first full-length album. Featuring ten original compositions, the recording includes Mark on Acoustic Bass, Allison Au on Alto Saxophone, Matt Woroshyl on Tenor Saxophone, Chris Pruden on Piano, and Nick Fraser on drums.

His versatility on both electric and double bass has led him to regularly work with a variety of Canadian jazz artists outside of his own groups including: Kellylee Evans, Barbra Lica, Joanna Majoko, Jake Koffman, and The Toronto Jazz Orchestra. Also working as a jazz educator, Mark is the private double bass instructor at Mayfield Secondary School for the Arts in Brampton and De La Salle College in Toronto. Over the summer months, he teaches at the National Music Camp in Ontario and at the International Music Camp in Manitoba and North Dakota. 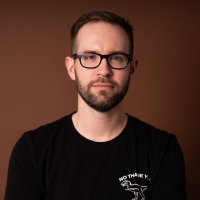 All About Jazz musician pages are maintained by musicians, publicists and trusted members like you. Interested? Tell us why you would like to improve the Mark Godfrey musician page.