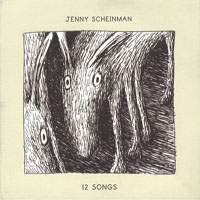 The beguiling melodies draw listeners in. The lush instrumentation, evoking the parts of an orchestra, and vibrant ensemble playing hold their attention. Beautiful tunes with hints of humor and dedicated, unselfish performances coalesce on 12 Songs. The results satisfy deep, repeated listens and remain accessible enough to appeal to a wide audience without pandering.

Earning notice in high profile gigs with guitarist Bill Frisell and singer Norah Jones, violinist Jenny Scheinman has emerged as an intriguing young composer with a string of strong recordings. 12 Songs continues the positive trend, with Scheinman crafting memorable tunes that subsume her varied influences and history to sound natural and unforced when translated through performance. Of course it helps to be surrounded by consummate musicians: Frisell, clarinetist Doug Wieselman, cornetist Ron Miles, piano/accordionist Rachelle Garniez, bassist Tim Luntzel, and drummer Dan Rieser. Never showy or self-aggrandizing, they deftly interpret Scheinman's compositions, punctuating them with taut solos and supporting the soloists with snippets of the written themes.

This supporting role was accentuated at the recent CD-release celebration at Tonic, where Scheinman employed a string orchestra of some dozen players under the direction of Eyvind Kang. On "Moe Hawk, the string section doubled the infectiously bouncy melody, before supporting Wieselman's crowd-pleasing bass clarinet feature and a note-twisting turn by Frisell. Kang had them fluctuating the dynamics while providing harmonic material as bassist Todd Sickafoose and drummer Mark Ferber (in for the gig) churned out the marching rhythm that accented the dominant beats.

The expanded strings heightened the drama of compositions like "She Couldn't Believe it was True, which unfolds from a sparse lyrical clarinet introduction, shifts to almost Celtic balladry from Scheinman's violin, then builds to a dramatic flourish of repeated staccato phrases punched up by the orchestra. On "The Buoy Song, the strings mimicked the sounds of seagulls, enhancing the song's maritime atmospheric textures. The sauntering Americana of "The Frog Threw His Head... found Scheinman plucking her violin like a mandolin, before stepping aside for Miles' cornet to alter the tonal colors and invert the lines. As on the recording, despite the participation of strong, idiosyncratic musicians, the songs are what leave the deepest impression.