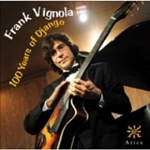 In this centenary year of Django Reinhardt's birth, it's inevitable that homages will be uppermost in the minds of the guitarist's disciples. Frank Vignola has no desire to resist this temptation, given that so much of his very fiber is directly descended from the Reinhardt legacy. But aside from the unavoidable "Nuages," Vignola sidesteps down a less over-trodden path.

A core trio of Vignola, rhythm guitarist Vinny Raniolo and bassman Gary Mazzaroppi, is augmented by guest accordionist Julien Labro. Between them, with a shower of speedily articulated notes and warm nuzzling of textures, they create a fulsome ensemble sound.

The opening "Rhythme Futur" is, appropriately, a tune that hasn't dated, making a busily urban scamper with Labro's accordion prominently featured. Vignola picks quickly, but doesn't relinquish his glowing tone, even when gushing spiky lines. "Troublant Bolero" gets an update, even if it's now gliding along a '70s Rio beach. Mazzaroppi is not neglected, taking the first of several bass solos that act as a contemplative respite. Most of the tunes are swift trotters, with "Swing Gitane" featuring a particularly breathless exchange between Vignola and Labro.

This album needs a few slow ballads and so Vignola inserts these calm interludes in strategic positions. "Tears" acts as a spellbinding guitar showcase, "Diminishing Blackness" has him soloing with sustained notes trailing at the end of each phrase and "Douce Ambiance" allows a lingering over stretched accordion flutters. In-between, though, "Mystery Pacific" is the choppiest number yet.

Right at the end of March, 2010, Vignola played one of Blue Note's Sunday brunch sessions in New York City. He brought out his slightly expanded Hot Club formation, with violin making up a quintet. The feel was directly reflecting the album, although an exuberantly compressed Reinhardt medley managed to subvert such a populist strategy with a blend of humor and dazzling virtuosity. Vignola and his band's skills might transfix the grazing audience, but periodic release arrived with outbreaks of absurdist action. They all suddenly struck a clustered pose for a photographer, and then edited highlights of the set were replayed for a tardy friend of the guitarist.