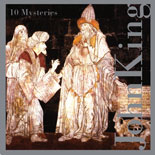 The point where composition and improvisation meet is often a quite perforated boundary. For a composer looking to engage performers as both interpreters of composed music and also as improvisers, the question of notation becomes of great importance. Composers have long looked to implement systems that determine certain aspects of a performer's behavior but leave other issues up to chance. This leads to a different gray area: the often equally ambiguous boundary between improvisation and indeterminacy. This distinction usually has more to do with the methodology of the composer than the actions of an interpreter.

In his second recording of music for string quartet to appear on Tzadik, violist John King explores the three-way intersection between composition, indeterminacy and improvisation. "10 Mysteries," the disc's primary material, is an extended work in nine movements. In addition to traditionally notated music, King has included his own notation system, which prescribes simple actions such as "drone" or "silence" or more directional transformations like "expand" or "distill." It is up to the performer to translate these instructions into music. The order and placement of these notations was determined through consulting the I-Ching, bringing yet another form of indeterminacy to the compositional process. The work becomes further indeterminate, as the player determines the duration of each semi-improvisational section.

With the string quartet Crucible, King has assembled a formidable ensemble to realize these works: violinists Cornelius Dufallo and Mark Feldman, cellist Alex Waterman and the composer on viola. The ensemble brings vitality, sensitivity and, in many instances, some astounding brute force to their impassioned interpretations. Sul ponticello scrapes and ethereal sul tasto glimmers intertwine, at times defying logic, at times coalescing into sublimely interwoven polyphony.

"Rivers of Fire" and "Winds of Blood" are the other works that appear (the latter appearing in two distinct realizations, version 1 and version 2). Both include electronic processing in addition to the traditional notated music and semi-improvisational elements present in "10 Mysteries." King describes this scenario as "trilogic unity," where predetermined, spontaneous and randomized information coexist. The ensemble plays notated music and improvises, always interacting with the sampled and processed versions of their own playing. The effect is often somewhat otherworldly, with familiar ensemble sounds gradually overtaken by a subtly processed equivalent—an oddly transformed echo of something that had happened previously. And then suddenly new quartet material returns—perhaps a sea of glissandos or false harmonics or a buoyant rhythmic pulse. The two realizations of "Winds of Blood" are quite distinct—the material is clearly the same, but things happen in a different order, as each player and also the electronics move independently through the work. This highlights the common facet of composition, improvisation and indeterminacy—in each methodology lays the chance for circumstance to exert its entropic influence.