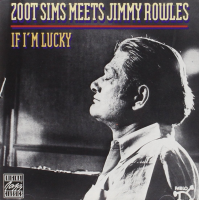 Zoot Sims was one of several tenor saxophonists who played in the spare, "cool" style originated by the legendary Lester Young. This meant a smooth, breathy tone without much vibrato and with little sliding between the notes, and no florid displays of virtuoso speed playing.

Sims had a long and prolific recording career that spanned the 1940's through the 1970's. He was a marvelous improviser, able to create multiple new melodies from a single song—always with respect for the original, but with wonderful creativity. You'll hear that in this CD.

With his love of melody, Sims often sought out beautiful songs that were overlooked by both musicians and the public. You'll hear that, too.

Sims' playing didn't change much over the decades. Did he fail to "evolve"? Or was he simply true to the kind of music he loved? I think it's the latter. His best recorded work was embodied in a series of albums he made in his mature years for the now-defunct "Pablo" label. This CD is one of those.

This is the album's title tune, an old song first performed by Perry Como in an undistinguished movie of the same name. The movie sank without a trace, and so did the song. But it's a beautiful melody. You might want to listen to the original Perry Como version first, just to get familiar with it. You can't help noticing how much richer and more complex this tune is in Sims' hands.

Sims' version opens with solo bass playing the unaltered melody. After the first few bars, the piano comes in with quiet chords, and then, in the midst of the refrain, Sims joins in to finish out the tune, all played perfectly straight. It's a haunting way to approach this tune.

Then, at 1:20, Sims begins to improvise, and it's time to start listening carefully. Notice how he's not just embroidering the original tune, but twisting and bending the melody to create something brand new. And yet if you're attentive, you can follow where he is in the tune. Now that you've fed the analytical side of your brain, treat the "feeling" side by letting the beauty of what Sims is saying soak in. The style may be cool, but the emotion can melt your heart.

Next, at 2:42, Jimmy Rowles does a quiet, reflective piano solo, with great respect for the mood Sims has set. Jimmy is a pretty bombastic pianist on much of this CD, but he reins it in here to complement Sims' treatment of the tune. Sims returns for some more beautiful improvisation, and then at 4:45 it's back to the original melody, straight up until the end.

Another seldom-heard tune, this one by Neal Hefti, from the 1964 movie "Sex and the Single Girl." (Not to be confused with "Sex and the City," in which people actually do have sex.) You might want to listen to the movie soundtrack version of "Legs" before you listen to Sims.

Sims' version opens with a quick crash of cymbals and piano chords, followed by Sims playing the melody straight. At 0:55, Sims begins a lengthy improvisation. Notice how he picks up the intensity starting with the second chorus at 1:40. At 2:23, Jimmy Rowles does one of his pretty-yet-exciting piano solos, in which he flirts with dissonance. Notice how his left hand pounds out startling chords while his right hand picks out delicate melodies.

At 3:57, a pretty bass solo, and then at 4:45 Sims returns, as if in a homecoming, for a round of even more intense improvisation. At 5:30 it's back to the original melody for a closeout.

To my knowledge, this old chestnut, written in 1898 by Victor Herbert, has never been associated with jazz, but that doesn't stop Sims from transforming it into a jazz centerpiece. To get familiar with the melody, you might want to listen to the Isley Brothers' version first.

Sims' version begins with a few dark chords from Jimmy Rowles, and then Sims does something unusual. In addition to giving us the melody straight, he plays it as if it isn't jazz. That is, he doesn't swing. Instead of toying with the beat, lagging behind it and catching up, he hits each note straight on, stressing each downbeat, and with no syncopation. (Well, almost. Sims can hardly contain himself.) Listen to the first ten notes ("Slum-ber on, my lit-tle gyp-sy sweet-heart"). He hits them as though he's playing bells, bam, bam, bam. Then at 1:25, with the beginning of the improvised part, Sims lets go and swings it. The effect is exhilarating, as though he's cast off shackles. There's no better way to illustrate the difference between non-jazz and jazz than to play the first two minutes of this piece.

At 2:45, Jimmy Rowles does a very nice piano solo—spare yet expressive, proving once again that it doesn't take cascades of notes to say something beautiful. At 3:44 Sims winds it up with a straight rendition.

(I Wonder) Where Our Love Has Gone; Legs; If I'm Lucky; Shadow Waltz; You're My Everything; It's Alright With Me; Gypsy Sweetheart; I Hear A Rhapsody.