By SETON HAWKINS
September 24, 2006
Sign in to view read count 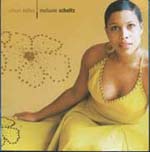 On her debut album, Zillion Miles, vocalist Melanie Scholtz spends a great deal of time demonstrating her chops in multiple genres—deliberately avoiding classification in any sort of mold. It's a daunting style of album to make, though several other South African jazz musicians have been doing it lately, notably Gloria Bosman and Concord Nkabinde. Like these musicians, Scholtz's effort results in some transcendent moments as well as some rough and inconsistent moments, but overall a successful album and an enjoyable listening experience.

Part of the album's success is due to her excellently chosen group of sidemen. In particular, Marcus Wyatt's trumpet and flugelhorn work is stunningly good—especially his slurry, slightly noir solo on "Constant as the Moon." Additionally, Kevin Gibson and Frank Paco both provide sympathetic, intricate drum work, and are both able to adeptly play in multiple styles.

In terms of songwriting, Zillion Miles reveals Scholtz's many strengths, but also at times highlights her limitations. Scholtz's voice is fairly versatile. She cannot belt like Gloria Bosman, but she has a strong R&B voice similar to indie.arie. Consequently, the somewhat folky acoustic numbers, like "Shameless Star" and "Him," are highly enjoyable listens, while songs like "Push" or "Circle," which have a more driving rock-like quality, come off slightly anemic.

Scholtz's greatest success on the album can be heard in two tracks. The first is "Summer Song," a folky indie.arie-style tune flavored with Cape Town ghoema, which offers a taste of her creativity as an artist. Additionally, the reprise of "This Can't Be Love," in which she pares down all the instrumentation to her vocals with bass and drums, is a dark funky groove that has a bite and an edge, reminiscent of Mina Agossi, that's not heard elsewhere on the album.

Ultimately, this album is an enjoyable listen, with enough merit to warrant keeping it in the rotation. While sometimes the genre-hopping doesn't quite work out, and Scholtz's songwriting gifts are not fully realized on some of the tracks, Zillion Miles still showcases a self-assured artist who is willing to stretch herself into new territories.

Note: this is available from One World on the web.

This Can't Be Love (a capella); Shameless Star; You Can Hold the World; Circle; Constant As the Moon; Summer Song; Standing on the White Line; Him; Everything You Need; Zillion Miles; Push; Another Day; Brighter Days; This Can't Be Love (reprise).