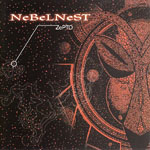 In the decade since they first came together, the members of French progressive band NeBeLNest have managed to create quite a stir. By combining elements of dark symphonic prog rock with the freewheeling experimental élan of Rock in Opposition bands like Henry Cow, the group has garnered a reputation for bringing the innovations of '70s art rock into the new millennium. The detailed composition and dense sonics on ZePTO are challenging enough to satisfy the most ardent prog fan, while avoiding the more painful self-indulgence that often turns away its detractors.

The group has been through a number of changes in guitarists since NoVa eXPReSS (Cuneiform, 2002), but the core trio of keyboardist Olivier Tejedor, bassist Grégory Tejedor and drummer Michael Anselmi maintains a consistent sound that continues to evolve. While plenty of progressive groups sport the infamous mellotron, few use it in as skewed a fashion as Olivier; Grégory's often fuzz-toned bass is the most ominous-sounding bottom end since Red-era King Crimson's John Wetton.

The ten-minute "Do What Thou Wilt is a crash course on how NeBeLNeST utilizes improvisation, shaping it in the studio into material with a compositional focus. Guitarist Cyril Malderez joins the trio for a free opening referencing the kind of improvisations King Crimson was noted for at the height of its '72-'74 incarnation. But while Crimson would find its way to backbeat-driven groove more often than not, NeBeLNeST remains harshly abstract and rhythmically tumultuous. Despite Wetton's sheer power, he was a harmonic weak link—but everyone in NeBeLNeST speaks a more sophisticated language, fluently. Halfway through the tune a fervent rhythm emerges, bass and drums storming with hardcore aggression, while Olivier blends a variety of synths with mellotron to create some of the most nightmarish music since Crimson's "The Devil's Triangle.

Elsewhere the writing is more clear-cut. "Pillars of Birth, despite its relative brevity, traverses considerably territory, from brooding ambience and potent, near-metal intensity to a clavinet-driven passage (suggesting how Gentle Giant might have sounded had it been of bleaker intent). "The Old Ones is equally episodic, and Olivier's mellotron is reminiscent of Gabriel-era Genesis—but, again, it's much darker. Sébastien Carmona's lengthy guitar solo on this piece is a cleaner, almost Canterbury-ish alternative to the sharper edge he adopts on the knotty "De Thriumpho Naturae.

Rarely an easy or uplifting listen, NeBeLNeST remains less overtly oriented toward wrist-slitting than the Belgium chamber-rockers Univers Zero. And with a more conventional instrumental lineup, the group has an inherently wider appeal. ZePTO is NeBeLNeST's strongest record to date: this is progressive rock for those who aren't afraid of music that leans far away from the light.

Track Listing: Pillars of Birth; Majnuns; The Old Ones; The Thing in the Walls; Fabric of Reality; De Thriumpho Naturae; Do What Thou Wilt; Sation 9.