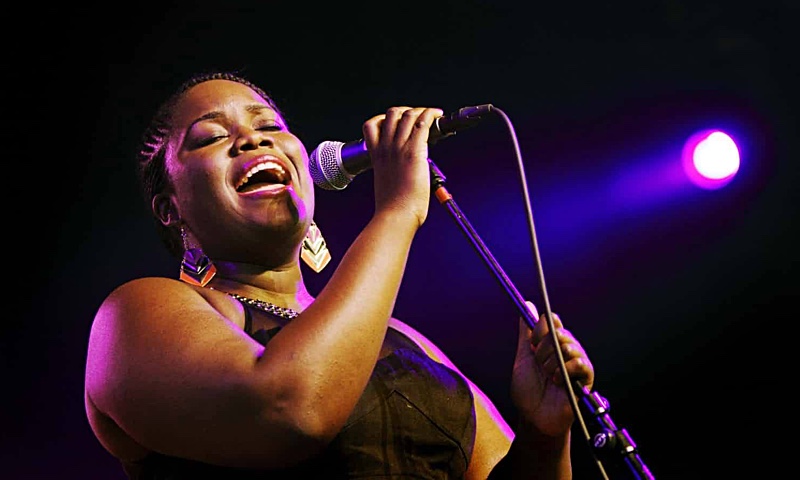 I wanted Caribbean rhythms to be the focus, drawing from Jamaica more than anything else. —Zara McFarlane

Zara McFarlane may have been made in Britain, but she belongs to Jamaica. The land of her mother and father is written in her soul and vibrates through her music. You can feel it in the bewitching rhythms and hear it in the socio-conscious words—both elements of reggae -that inform her distinctive version of jazz, especially on the critically-lauded collection, Arise.

The London-born singer was five years old when she first went to the Caribbean island—a sort of spiritual homecoming—and has been there many times since, including on a field trip to research early indigenous folk songs.

"As children we would spend long summers there, often six weeks at a time," she recalls.

"So at some point you almost feel like you're living there. My grandparents on my mum's side lived in the countryside, so it was a very different way of life from here. It was very much around nature. My grandfather was a farmer. He had a lot of land, he had a lot of produce—fruit and vegetables—so when you were preparing something for dinner, you'd pick something off the tree."

It was here too where McFarlane was exposed to the sounds that would inspire not only Arise, but her first couple of albums, Until Tomorrow and If You Knew Her.

"My grandmother lived on a mountainside in a very small village. Along the way you had these little shops that, from Thursday to Sunday, would have sound systems blasting all day. There was one that felt like it was outside my grandmother's house, though it wasn't—the sound was so big. So a lot of my childhood I heard songs from there. And then when I got back to England I was still hearing those songs at family gatherings. Some of the artists I listened to would have been Freddy McGregor and John Holt."

The sweet harmonies of roots reggae particularly resonated with McFarlane, and she has, unconsciously perhaps, assimilated them into her own vocal style.

"It's a very warm sound, a very distinctive sound—and I like the phrasing. They express themselves through sound and through their voices. I think that plays into the way I approach singing, the way that I sing a note. I'm not overly concerned with a beautiful sound, so much as the expression."

Alongside her own original material on Arise, McFarlane has recorded covers of Norma Dean's "Peace Begins Within" and The Congos' "Fisherman"—songs that were an integral part of her formative years, and, in the case of "Fisherman" with its allusion to child poverty, lyrically relevant in a contemporary context.

"When I first started thinking about the album, the music came first. I was very clear about sounds and what I wanted musically—I wanted Caribbean rhythms to be the focus, drawing from Jamaica more than anything else. Lyrically I did struggle with what I wanted to say. I suppose the things that were happening, social things reflected in the news, everyone being unsettled, not knowing what was going to happen -for me, it felt like there were big changes about to come at the time I was writing the record. Some things hadn't quite happened yet, like Brexit, the Grenfell Tower thing, but there was that feeling that things were not going in a positive direction.

Brexit—the handle applied to Britain's exit from the European Union—reopened old wounds of racial division in the country. Though according to McFarlane, this division "has always been there. I grew up in Dagenham. When I was growing up there, it was very racist, it wasn't very mixed. So Brexit didn't surprise me. It wasn't shocking. It was disappointing, definitely. Sometimes when you live in London, you have a different perspective of life compared to the rest of England. Brexit proved that, really. Most cities are multicultural, to some degree. But when you're in a city you feel like everything is like that, but it's really not."

Despite the Jamaican tenor of McFarlane's oeuvre—in terms of political as well as sonic awareness -she remains a jazz singer, and one with few equals among her peers. Yet her baptism in the genre was almost serendipitous.

"I loved musicals when I was younger. I studied musical theatre and did a one year course before I did my degree in music, and I got a lot of compliments about my voice when I did a module on jazz music. I knew a lot of the material already -jazz standards from the great American songbook. I probably heard the music in movies before that, but it definitely wasn't something that was played or explored in my house. When I did my degree there were more jazz modules, and I became more aware of it and got more involved in it and wanted to explore it more."

She regards Nina Simone and Billie Holiday as touchstones, while acknowledging a greater appreciation of Ella Fitzgerald.

"Nina and Billie are very emotive singers and they tell emotional stories, and that's what I hope to do through my music. I never really did, for a long time, appreciate Ella Fitzgerald, because I didn't find her very emotive. I didn't connect with her sound. But as I've learned more about jazz, and have a better understanding of things, obviously she's one of the greats in terms of vocal skill, improvisation and just even the length of her career. I'm interested in feeling something. You're not getting it with her—you get showmanship with her. You get virtuosity and you get perfection."

McFarlane's jazz sensibility developed through her involvement in Tomorrow's Warriors, the organisation co-founded by Gary Crosby and Janine Irons in 1991, to increase diversity across the arts in Britain through the highest art form of them all. Crosby was so impressed by her chops, he invited her to perform as part of his Jazz Jamaica outfit with legendary South African trumpeter Hugh Masekela at London's Barbican Theatre—an experience she describes as "massive."

"I'd done big gigs before in slightly different ways, but nothing of that calibre, with that kind of musicianship. What they do so well is they know how to develop talent, put you in situations to push you and see how you cope. It's great to have those opportunities."

And she has availed of other opportunities to evolve artistically, whether debuting with the Royal Shakespeare Company in the Iqbal Khan-directed Anthony and Cleopatra, or taking part in a programme devised by London's Stratford East Theatre "to bring non-musical theatre writers into musical theatre."

She explains, "I'm working on a musical was originally going to be based on a Jamaican folklore story, but now I've sort of moved away from that a bit. It's something that I've always wanted to do. It's exploring themes of slavery, witchcraft—and there's a love story in there. That's as much as I can say at the moment."

Meanwhile, McFarlane has already started thinking about her next album.

"I'd like to do something slightly more electronically influenced—though I don't know what that means yet! I would like to use my production skills a bit more. Right now, that's where my head is at."