By Woodrow Wilkins
October 14, 2008
Sign in to view read count 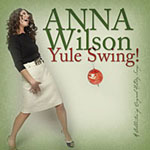 If Christmas is a time for giving, vocalist Anna Wilson scores a two-base hit with Yule Swing. Not only does she offer listeners the gift of holiday music, but she also contributes to a charitable cause: Habitat for Humanity.

Like many vocalists, this Pennsylvania product grew up with the Great American Songbook standards, including works by Frank Sinatra and Judy Garland. However, rather than adopting them as her own, which many artists before her have done, Wilson has preferred to write her own music, with the goal of creating new jazz songs for younger listeners as well as offering something different for older fans who have heard the same classics over and over. In addition to her musical career, Wilson has been an avid supporter of Habitat for Humanity, making appearances on the organization's behalf and allowing it to use her song, "A House, A Home," in public service announcements on radio and television.

The title song sets the stage. With a swinging horn section, Wilson rings in the holiday season. "Forget caroling / Everybody dance and sing," she sings. The double entendre is evident in the joyful sound. "Yule Swing" or "you'll swing," either way, it's a perfect stocking stuffer.

"Through Their Eyes" is a tribute to children. This easygoing track, with muted trumpets softly in the background and elegant piano by Jeff Franzel, features Wilson's rich alto voice. With lyrics like, "And be young at heart for just a while," it's a call for adults to use the wonder of children to help overcome their troubles and enjoy life.

"One Day" quiets things down. Wilson reminds one of Doris Day as she sings about the gratitude of family during that special day. The background arrangement is minimal. Then, she kicks it into high gear again with "Mrs. Claus," a sassy, playful nod to the woman behind Santa. Rick Braun makes a guest appearance, playing muted trumpet on "A House, A Home."

While Yule Swing is 10 all-new songs, the melodies and rhythms revisit a bygone era. Wilson and her co-writers capture the spirit of old-school swing. Some instrumental solos and the big horn section certainly add to the pleasure, but it's Wilson's voice that makes this collection a gift that will last. Everybody loves Christmas, and most artists have it in them to record Christmas music at some point in their careers. However, it is the rare singer who trims the tree with all-new material. Wilson does, and it's a beauty.

Yule Swing; Christmas Is Coming to Town; Through Their Eyes; Holiday Lovin'; Light Me Up; Wish; One Day; Mrs. Claus; A House, A Home; Resolutions.