By Edward Blanco
November 14, 2019
Sign in to view read count 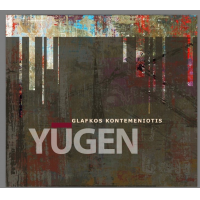 The second album by Cypriot pianist and composer Glafkos Kontemeniotis, a native of New York City since 1988, presents eleven original compositions. This project is his tribute to the existence of beauty in the world, if one knows how to find it. Joining him on this journey are some of New York's elite players including saxophonist Joel Frahm, bassist Marcus McLaurine and drummer Dave Meaden. Also featured are French percussionist and vibraphonist Alexander Gagatsis and Greek singer and educator Eleni Arapoglou, who sings on one track.

The music opens up with one of the finest songs on the set, the perky and spicy "Never Enough," showcasing Frahm's exquisite solos and the leader's masterful work on the keys. The tempo slows down on "Dingane," where vocalist Arapoglou makes her only appearance in a lengthy number where the music twists and turns, changing tempo and finally lifting the sound with Frahm and the others leading the way.

There's plenty of energy on such tracks as "Catharsis," "A Monk Met A Goat" and "Flisvos." The title track is a bit more reserved, featuring a down tempo sound it's but still a burner in every sense. The album sizzles all over with the last two tracks, the heaters "Exhibit A" and "Hope."

Kontemeniotis crafts a beautiful session with "beauty" being the operative word.