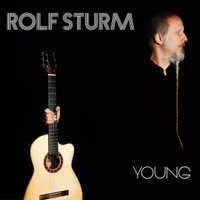 Guitarist Rolf Sturm has found himself on two recent and exceptional recordings: Roswell Rudd and Heather Masse's August Love Song (Red House, 2016) and Jenna Mammina & Rolf Strum's Spark. He is a guitarist of expansive facility and a sense of humor, to boot. Take his present Young as an example. The release began conceptual life as a collection of Victor Young compositions. You know...the guy who wrote "When I Fall in Love," Moonlight Serenade," "Love Letters," My Foolish Heart," "Stella by Starlight," and "I Don't Stand a Ghost of a Change with You." Yes, that guy. Well, Sturm decided to address several of these, but when he saw the album art, could not resist throwing in some Neil Young compositions too. Victor Young and Neil Young...that makes of strange bedfellows indeed!

So interspersed among these pre-1950 Great-American- Songbook standards, mostly show tunes, are four Neil Young classics. The old a new meld into an informed continuum serving to remind us that all music as a thread passing through civilization connecting all time. Sturm studied with John Abercrombie, whose influence donated an abstraction to Sturm's style, which is as informed by gypsy jazz as it is by the New Orleans—Kansas City— Chicago triumvirate. "My Foolish Heart," Stella by Starlight," pair oddly well with "Pocahontas" (from Rust Never Sleeps (Reprise, 1979). An assertive, muscular "Cowgirl in the Sand" rubs against a chaste and introspective "Ghost of a Chance" offering a contrast as impressive as an abstract "Tell Me Why" enhances a dark and rich "Golden Earrings." Sturm successfully navigates two disparate composers to make a cogent whole. Good Show.

Sweet Sue, Just You; A Weaver of Dreams; Cowgirl in the Sand; A Ghost of a Chance; When I Fall in Love; One of These Days; Love Letters; Pocahontas; My Foolish Heart; Stella By Starlight; Tell Me Why; Golden Earrings.