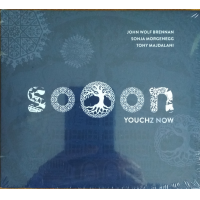 Founded in 2018, the trio Sooon (there are good reasons for it having three O's) comprises Irish-Swiss pianist John Wolf Brennan, Swiss vocalist Sonja Morgenegg and Haifa-born Palestinian percussionist Tony Majdalani. From 2012 onwards, Brennan and Majdalini were in the trio Pilgrims together, alongside guitarist Marco Jencarelli but, prior to Sooon, Morgenegg had no experience with either of them.

Youchz Now is Sooon's debut album, recorded live at Soundfarm Studio in Krien, Switzerland, in 2019; it has fourteen tracks, ranging in length from a-minute-and-a-half to six-and-a-half-minutes, sixty-six-minutes altogether. All the tracks were written by Sooon; they display the influence of a range of musics including religious music, folk, Arabic, jazz, pop.... The sound and musicality of their lyrics far outweigh their literal meanings. Although group compositions, the songs are not through-composed but allow plenty of scope for improvisation.

Not long into the opening track, it is obvious that Morgenegg is this trio's trump card; her soaring voice is flexible and elastic, seemingly capable of going wherever she chooses. In particular, she is a dab hand at yodeling—in fact, "Youchz" is the Eastern Swiss phrase for yodeling, which helps explain the album title. In addition to Swiss yodeling, she also practises Georgian yodeling—Krimantchuli—Hawaiian yodeling, Nordic yoik, and Central Asian overtone singing—quite a varied palette. Across the album, her performance is an education and a tour-de-force.

Excellent musicians that they undoubtedly are, Brennan and Majdalani effectively play the role of accompanists for Morgenegg here, with the percussionist adding vocal contributions alongside her. As accompanists, they are first rate, employing a sizeable battery of instruments to create a richly detailed, complementary backdrop which frames her voice perfectly and plays to the songs' strengths.

Altogether, the trio's music is predominantly joyful and uplifting. On the basis of Youchz Now, it is already worth hoping that this trio stays together for a long time, records more albums and tours extensively. A real find.