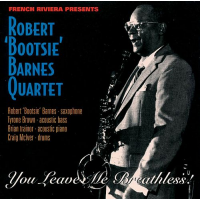 Robert "Bootsie" Barnes has been a fixture on the Philadelphia jazz scene for years. He has a steady gig at Philly's 23rd St. Café and over the years, has worked with a number of the many jazz stars that city has spawned. He also has an appearance on the Bill Cosby show to his credit. Although a graduate of the Coleman Hawkins school for tenor, Barnes' playing leans toward the soul-jazz style of Gene Ammons, Willis Gater Jackson and Houston Person.

There is not much to chose from between these two albums recorded in the 1990's. Both rely heavily on the Barnes' way with the ballad. The first release You Leave Me Breathless! gives Barnes more leeway to extemporize such as on a passionate rendering of "Sweet & Lovely". This track also features splendid solos from Brian Trainor on the piano and Tyrone Brown on bass along with some well timed interventions by Craig McIver's drums. This initial release also has a strong arrangement of "I Have Dreamed" and a haunting playing of "A Nightingale Sang in Berkeley Square" recalling Dexter Gordon's 1980 richly rendered account of this popular World War II tune.

Hello recorded a couple of years later, also concentrates on the ballad form. But the producer gave the tenor free rein with Freddie Hubbard's bop classic "Blues Function" with trumpet player John Swana joining the group at the blues table. He and Barnes give this tune several turns and twists before they put it down. But the slow, mood music dominates. There's a moving "Autumn in New York" with Trainor's soft touch on the piano and Brown's bass laying out a clear, subdued rhythmic path. Lionel Ritchie's ballad "Hello" gets a very enthusiastic reading from Barnes and group. The ballad style is interrupted with an exotic, Latin tempo "Flamingo". That Barnes has kept the same rhythm section for this second session provides for a familiarity in the approach towards the music and with each other that comes through on each cut. Each member of the rhythm section is listening closely to the direction Barnes takes and responds accordingly. Good stuff all around! Learn more about Barnes at www.23cafe.com/bootsie_barnes.htm.

You Leave Me Breathless; Spring Can Really Hang You up the Most; Never Let Me Go; Easy Walker; I Have Dreamed; Day Dream; One for Amos; A Nightingale Sang in Berkeley Square; Sweet and Lovely; Violets for Her Furs; Minority Street of Dreams*; Lament; Chelsea Bridge; Only Trust Your Heart; Summer Knows (Summer of `42); Flamingo; Misbegotten Moon; Blues Function*; Autumn in New York; Hello.