Brian Bromberg: You Know That Feeling 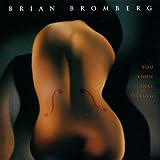 Few are the bass players whom the average music fan can name. There are simply not that many who stand out as more than a member of rhythm section, however tight. Paul McCartney. Sting. Bootsy Collins. Tony Levin. Gene Simmons. These may be the greater part of a list which is, for most, a count no longer than one hand long. Shorter still is the list of bassists who can take their playing one step further.

Brian Bromberg is one such bassist.

Having originally began his musical career on drums (as was the way for the Bromberg boys), Brian soon switched to classical upright bass. Though this switch was more or less his choice, Bromberg's next musical move was more demanded than decided. In order to get a gig with Stan Getz's band, Bromberg dropped the upright, picked up an electric four-string and, leaving home on his 19th birthday, started down his own musical road less taken.

Since then, Bromberg has played with a long list of musical giants, from Stan Getz to James Moody; from Dianne Schurr to Nancy Wilson. He has also been heard (and seen) in many popular films and programs, from The Fabulous Baker Boys to Melrose Place. As he has picked-up more and more musical partners, he has also picked-up more and more playing styles. In the process, however, Bromberg has been able to drop a major piece of the modern Jazz ensemble.

As emphatically stated in the liner notes of You Know That Feeling, "THERE IS NO GUITAR ON THIS ALBUM" (sic). Instead, Bromberg uses a variety of bass bodies and tunings to match registers usually reserved for the six-string. As a result, he is able to match the high vocal line on his convincing cover of Earth Wind and Fire's "September" and also offer the Jobim-y pizzicato of "A Love Affair."

Though most of the album consists of programmed "smooth jazz" selections which may turn off purist jazz fans and aficionados, Bromberg's versatility and talent have been consistently strong enough to command the assistance of modern day giants like Dave Grusin, Tom Scott, Ernie Watts and, on "Feeling," Joe Sample and Everette Harp. Despite a few sappy synthesized songs, You Know That Feeling is a solid demonstration of a near unique talent.