BY WOODROW WILKINS
October 16, 2005
Sign in to view read count 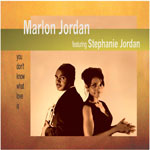 There's a little bit of Miles Davis, Freddie Hubbard, and perhaps such contemporaries as Rick Braun and Chris Botti on You Don't Know What Love Is. However, there's a whole lot of Jordan. More to the point, lots of Jordans. This recording, featuring Stephanie Jordan, is definitely a family affair. The Jordans rank with other noted jazz families, like the Adderleys of Florida, the Eubanks of Pennsylvania, the Montgomerys of Indianapolis, and the Laws of Houston. They hail from New Orleans, which has also produced some well-known families of its own: the Nevilles and the Marsalises.

They all come together for a fantastic voyage through fresh interpretations of eight jazz standards, all injected with a bit of New Orleans vibe. Marlon is clearly the centerpiece of this collection, with Stephanie singing on five of the eight tracks. You Don't Know What Love Is is his first recording as a leader in eight years. Stephanie performed the title track "Seasons Start in the Tribeca film release Café Society. She also co-produced Stephanie With Strings with Rachel and members of the Louisiana Philharmonic Orchestra. Rachel is a member of the orchestra and teaches at both Jackson State University and the New Orleans Center for the Creative Arts.

The album kicks right off the bat with a sizzling interpretation of Oscar Hammerstein's "My Favorite Things. Some covers are simply covers. But sometimes they're done with such verve that the performer implies ownership. With backup strings for dramatic effect, the tune is straightforward through the opening verses. Then it meanders through free-form solos by Jordan's trumpet and his father's blistering tenor sax. Bassist David Pulphus then brings us into Miles Davis' "All Blues, a sassy offering that highlights pianist Darrel Lavigne and clarinetist Batiste.

Stephanie Jordan joins the ensemble for the melancholy title song. Her tone is crisp, perfect, but not in that polished way that sounds like an opera singer attempting jazz. She is more like a master of technique, yet with plenty of soul. This is particularly noticeable on the delightful "Joey and the elegant "Portrait, the latter featuring Chatters on trombone. She also has a playful side, exhibited on the closing "Now Baby, or Never, which brings to mind West Coast diva Clairdee.

Throughout You Don't Know What Love Is, Marlon Jordan and his family of musicians treat us to a bit of old and new. Some modern and New Orleans-styled flavors are successfully seasoned with old-school solos, enhanced even further by the background strings. Although Marlon Jordan is the leader, he often steps aside to allow his bandmates a moment in the spotlight—a practice reminiscent of yet another trumpet-playing bandleader: Maynard Ferguson.

My Favorite Things; All Blues; You Don